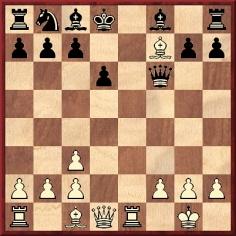 However, this is not an instance of an announced mate which is longer than the game itself (see page 164 of Chess Explorations, pages 8-10 of Kings, Commoners and Knaves and page 50 of A Chess Omnibus), because from the diagrammed position there is a mate in nine.

Regarding instances of an announced mate which is longer than the game itself, the following encounters have been discussed in C.N.:

The accuracy of the last two cases has yet to be demonstrated.

‘However, this is not an instance of an announced mate which is longer than the game itself (see page 164 of Chess Explorations, pages 8-10 of Kings, Commoners and Knaves and page 50 of A Chess Omnibus), because from the diagrammed position there is a mate in nine.’

In the light of a comment received from Stephan Bird (Caernarfon, Wales) we clarify that in this topic ‘announced mate’ refers to a correct announcement of the shortest possible forced mate.


Marc Hébert (Charny, Canada) asks for information about the famous blindfold game in which J.H. Blackburne announced mate in 16 moves.

The conclusion was published on page 211 of Mr Blackburne’s Games at Chess by P. Anderson Graham (London, 1899), with the solution on page 326: 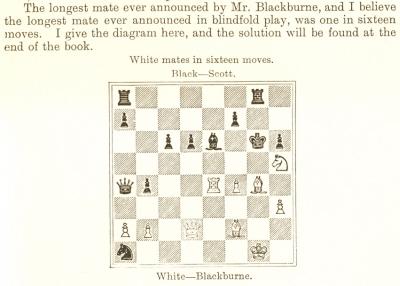 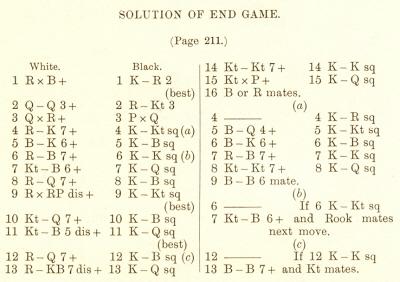 Thus the only information supplied was Black’s name: Scott. It was not stated that the game had occurred in a simultaneous display, although that assumption is commonly made.

The position was given on page 41 of Blindfold Chess by E. Hearst and J. Knott (Jefferson, 2009), the co-authors stating that they had been unable to find any further particulars. Where, if anywhere, was the position published before the appearance of P. Anderson’s Graham book? We also seek bare references in nineteenth-century sources to such a game, or to an opponent of Blackburne’s named Scott.

Jerry Spinrad (Nashville, TN, USA) draws attention to the Sydney Mail of 19 February 1887 (page 411), which reproduced from the Fortnightly Review an article by L. Hoffer entitled ‘The Chess Masters of Today’. It was stated:

‘There are masterpieces of Blackburne’s blindfold games published in which he has announced checkmate in 17 moves.’

We note that the same remark appeared on page 162 of the Chess Monthly, February 1889.

Which games published before 1887 could Hoffer have had in mind? 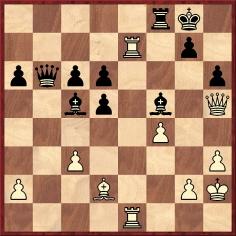 C.N. 4582 remarked that the familiar Barry v Pillsbury game (in which White announced mate in 13 moves) is commonly misdated 1889, instead of 1899.

We add a letter from Barry published on page 185 of the August 1935 Chess Review: 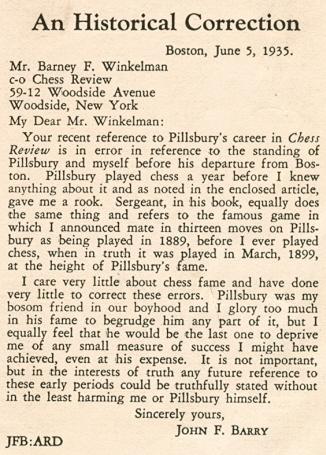 
Game 43 in Alekhine’s first volume of Best Games, against ‘M. Prat’, was described as ‘one of 20 simultaneous games played at Paris, September 1913’. The book was published in 1927; the German and Dutch editions brought out in 1929 identified Black as ‘J. Prat’ and did not stipulate the number of games in the exhibition. On the other hand, Deux cents parties d’échecs (Rouen, 1936) said that it was a 20-board display and that Black was ‘N. Prat’.

La Stratégie (October 1913, page 415) gave only the conclusion of the game and did not offer corroboration of Alekhine’s later statement that after Black’s 21st move he announced mate in ten: 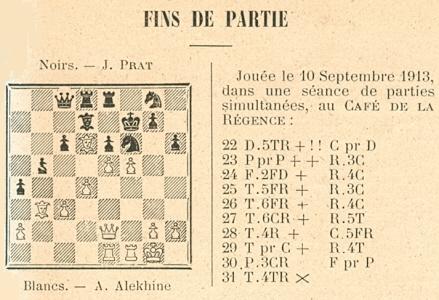 As regards the number of players, 16 was the figure specified on page 360 of the September 1913 issue of the French magazine: 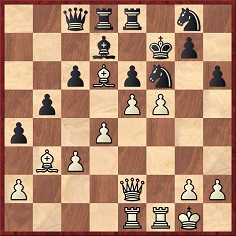 As regards Black’s identity, we have never seen a full name, but only ‘Prat’, with or without an initial. Our earlier item pointed out that in the English, German/Dutch and French editions of Alekhine’s first Best Games book the initial was given as M., J. and N. respectively. A fourth option, I., is in the Russian edition (Moscow and Leningrad, 1927). Although ‘M. Prat’ is the most common version, a misunderstanding may have arisen through M. being an abbreviation for Monsieur (as discussed, in another context, in C.N. 6693). 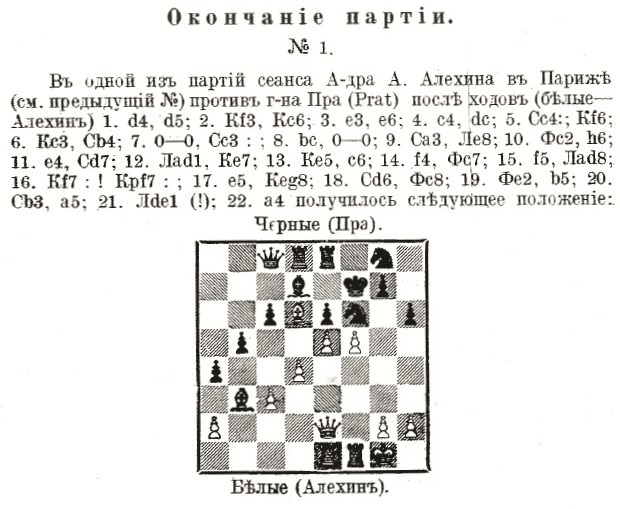 The heading stated that Alekhine played ‘against Mr Prat’; г-на is an abbreviation of the genitive singular form Господина (‘Mr’).

The Royal Library has also kindly provided the item on page 273 of the 1 September 1913 edition of Shakhmatny Vestnik to which the 15 September issue referred: 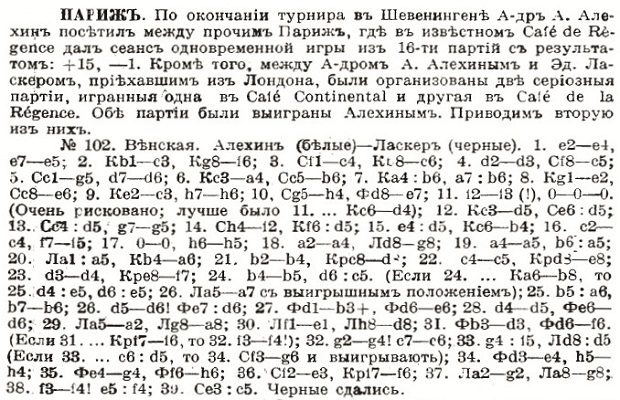 The report that Alekhine’s exhibition in Paris comprised 16 games (+15 –0 =1) corresponds to the information on page 360 of La Stratégie, September 1913: 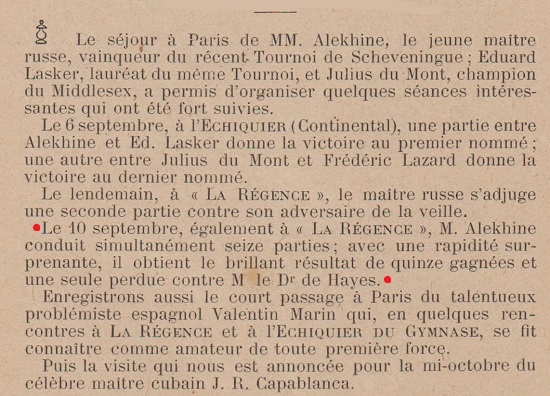 As previously shown, page 415 of the October 1913 issue of La Stratégie also gave the date of the display as 10 September 1913. The fact that the above issue of Shakhmatny Vestnik was, formally at least, dated 1 September is not a stumbling-block, given the 13-day difference between the Julian and Gregorian calendars and the inclusion of Alekhine’s game against Edward Lasker, played on 7 September. It is, though, unclear why ‘August 1913’ was in the heading to the Prat game on page 119 of volume one of Complete Games of Alekhine by J. Kalendovský and V. Fiala (Olomouc, 1992). Page 87 of Alexander Alekhine’s Chess Games, 1902-1946 by L.M. Skinner and R.G.P. Verhoeven (Jefferson, 1998) put only ‘1913’ (and ‘J. Prat’), but the previous page duly referred to the 16-board display on 10 September 1913.

Although page 192 of Capablanca-Magazine, 15 November 1913 also dated the game ‘10 September 1913’, there was a mysterious assertion that it was played in ‘Carisban, Russia’: 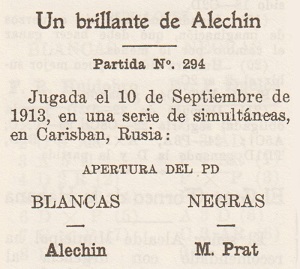 The English and French editions of Alekhine’s first Best Games book stated that the simultaneous display consisted of 20 games, which contradicts the reports in Shakhmatny Vestnik and La Stratégie. Below are the headings in the various editions of Alekhine’s book, in chronological order of publication (London, 1927; Moscow and Leningrad, 1927; Berlin and Leipzig, 1929; The Hague, 1929; Rouen, 1936): 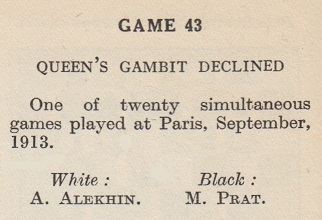 The lengthiest coverage of Alekhine v Prat that we have seen is on pages 199-215 of How to Think Ahead in Chess by I.A. Horowitz and Fred Reinfeld (New York, 1951). The worst treatment is on page 308 of The Games of Alekhine by Rogelio Caparrós and Peter Lahde (Brentwood, 1992). Alekhine’s brilliant conclusion beginning with 22 Qh5+ was not even mentioned: 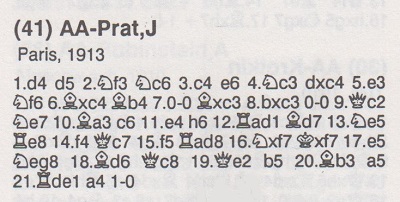 ‘When and why did the practice of announcing mate in tournament and match games end?’

Is there unanimity today among administrators and officials on the procedure applicable if a player announces mate during a game (and, additionally, in case of an incorrect announcement)? Information will also be welcomed on the most recent games to contain mate announcements. Have there been many significant specimens since Marshall v Bogoljubow, New York, 1924, in which White announced mate in five moves at move 38?

A cutting from page 1 of an untitled scrapbook produced by Dale Brandreth: The Factfinder refers to a number of older examples of announced mates, and one case of an announced stalemate.

‘For more than 30 years I have worked as a chess arbiter, and it has never happened that a player announced checkmate in x moves.

If it did occur, I would apply Article 12.6 of the current Laws of Chess:

“It is forbidden to distract or annoy the opponent in any manner whatsoever. This includes unreasonable claims, unreasonable offers of a draw or the introduction of a source of noise into the playing area.”

The player can be given a warning, but I would also be inclined to add some extra time to the opponent’s thinking time, and especially if any such remark were made when the opponent was short of time.

In my opinion, announcing checkmate in a certain number of moves is annoying, distracting and also intimidating for the opponent, and it is therefore forbidden.’


Steve Wrinn (Homer, NY, USA) recalls the report in the Bled, 1931 tournament book by Hans Kmoch that Bogoljubow announced a non-existent mate in two against Asztalos: The relevant text is on page 121 of Bled 1931 International Chess Tournament translated by Jimmy Adams (Yorklyn, 1987).

Mr Wrinn also mentions that the English edition includes an article by Salo Flohr, translated from a 1976 issue of 64, which refers to the announced mate (on pages xi-xii). See too page 29 of the March 2003 CHESS, in which issue the full Flohr article was reprinted.


Wanted: early examples of announced mates, as well as information on how the practice began and developed.

‘Pages 71-74 of the November 1880 Chess Monthly have an article by Alphonse Delannoy, and page 74 describes an encounter between Labourdonnais and Mouret where the former announced mate in five moves in the final game of a series in which the stakes escalated dramatically. Labourdonnais offered a knight sacrifice, which Mouret accepted. Then Labourdonnais said, in Delannoy’s account: “Well, sir, you have lost the game. You are mated in five moves.”

It is stated that this occurred before Labourdonnais had directly challenged Deschapelles, and therefore presumably before their 1821 contest involving Cochrane as well, but after Mouret had been on a tour as director of the Turk. This places the event around 1820, though possibly a year earlier or later.’ 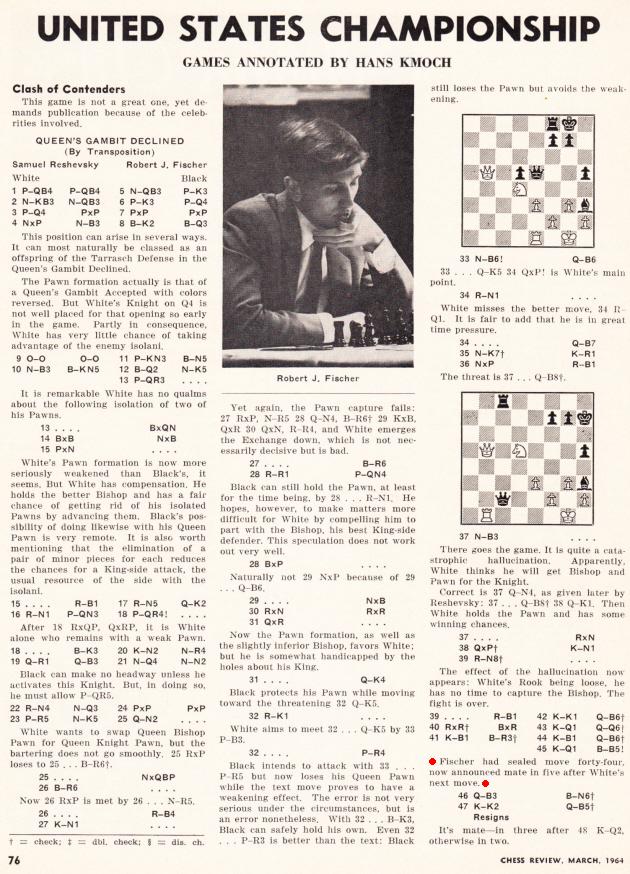 
Richard Hervert (Aberdeen, MD, USA) asks whether anything further can be found about the announcement of an alleged mate-in-ten first discussed in C.N. 1857. See page 83 of Chess Explorations, as well as pages 29-30 of A Chess Omnibus and a Chess Explorations article of ours at ChessBase.com dated 31 May 2008.

Below is the game as it appeared in our source, page 65 of Kunst des Positionsspiels by Herbert Heinicke (Hamburg, 1981): The latest computer check still suggests that there is no clear mate. Black wins in all lines, and 37 Kg6 offers more resistance than 37 Ke6.

‘We present this month a correspondence game – taken by us from the Hartford Times – between Mrs Gilbert, of Hartford, Connecticut, the strongest lady player in the United States, and Mr Berry, of Beverly, Massachusetts, in which the former announces a mate in 19 moves. The immeasurable superiority of trousers chess is often vaunted, and the natural incapability of women for excellence in the game is deduced from certain propositions, any one of which is a fact taken for granted, though neither self-evident nor demonstrable. The strength of men’s prejudices and of their boot-holding extremities are [sic] generally about on a par, and very often they cooperate. Their physical superiority they use first as a force, and then as an argument. Excluding the ladies by the rule of fist from clubs and associations, discouraging their home play, and pooh-poohing their first timid efforts, the masculine countenance then lights up with an idiotic grin which seconds the enunciation. “Women play? Can’t do it, sir; Nature wills otherwise. Let them cook and sew, that’s what they can do, sir.” Very much would we like to get hold of one of these oracles, place before him the position in which Mrs Gilbert announced “checkmate in 19 moves”, and ask him to find out how it was to be done. If, moreover, we could extract from him a pledge that he would not dine until he had solved it, then our cup of happiness would be overflowing, for we should have delicious visions of many dinnerless days as the just punishment of irrational prejudication. There is this further to be said, that to study a position when you are told there is a mate in 19 moves is quite a different thing from conceiving the idea of it in the first instance, and then working up the possibility into a certainty. Mrs Gilbert says that it was one of the severest intellectual tasks she ever attempted. We have no doubt of it, especially in a case like the present, where the defence is not forced to a particular line of play. The human mind with difficulty grasps such a succession of sequences, even with the solution given, and such an achievement in one of the depreciated female sex ought to have two effects – shake the prejudices of men and create self-confidence in women. We should like to see chess become more general among the latter. Why should it not be a common thing for a man and wife to have a game before going to rest? Much more companionable and reasonable, we should say, than the one soaking his brains with numerous nightcaps, while the other spends a listless half-hour unpinning her back hair and counting her spoons.’

‘A novel prize is offered by a member of the Manhattan Chess Club to the competitors in the club championship tourney. The prize is to be awarded “for the best long-distance mate or, in other words, to that player who shall announce mate the furthest number of moves ahead”.’