One way in which an ordinary amateur can become a chess immortal is by being in the right place at the right time. If, for instance, he is on the scene just as a new prodigy emerges, even an inglorious defeat will perpetuate his memory. A case in point is Juan Corzo, for whom the right place and time were Havana 1901, when he lost an historic match to the young Capablanca. Two of Corzo’s defeats are among the most celebrated games in literature, and his name will be remembered as long as chess is played.

But despite this, and to say nothing of the further publicity he gained by being on the sharp end of a Capablanca brilliancy prize game in the Havana, 1913 tournament, Corzo’s immortality clearly has its limits. Hardly anyone nowadays knows anything about him, and it is not easy to find out more. Investigations are hindered by the erratic nature of Cuban periodical literature, which is all fits and starts. Time and again, new chess journals have wobbled along to an early grave, and throughout most of Corzo’s life the country was without any specialized magazine. Chess books appeared at the rate of two or three a decade; Corzo wrote none and none wrote about Corzo.

Juan Corzo y Príncipe was born in Madrid on 24 June 1873 but moved to Cuba when he was in his mid-teens. The first serious event in which he appears to have participated was the championship of the Havana Chess Club in 1896. He came fourth but won the brilliancy prize for his game against Manuel Golmayo:

Manuel Golmayo’s father was Celso Golmayo y Zúpide, who had been generally accepted as Cuban champion since his 1862 match defeat of Félix Sicre. Celso did not play in the 1897 national championship tournament, but his title stayed in the family because another son, Celsito, was declared champion after a play-off against Andrés Clemente Vázquez. Although Corzo finished only fourth, he was evidently improving rapidly; in the following year’s tournament he won the national title outright. There was no immediate call for him to defend it.

After winning two informal games against Capablanca in September/October 1901, Corzo faced the prodigy in the now famous match, which lasted from 17 November to 18 December 1901 and ended in victory for Capablanca by +4 –3 =6. It used to be feared that only the two games Capablanca published in My Chess Career had survived, but the remaining scores have since trickled into circulation, largely thanks to the research of Miguel Alemán, E.W. Axe, James Gilchrist and Paul Leith. A number appeared in the BCM in 1960 and two subsequent books published the full set: Los niños prodigio del ajedrez by Pablo Morán (Barcelona, 1973) and The Unknown Capablanca by David Hooper and Dale Brandreth (London, 1975). The latter work gave the clock times, showing that Capablanca played at an average speed of 90 moves an hour.

The exact status of the match is debatable. Capablanca wrote in My Chess Career, ‘the victory made me, morally at least, the champion of Cuba’, but in the Buenos Aires newspaper La Crítica of 19 September 1927 he remarked after his first match game against Alekhine in the world championship: ‘Since my first match, with Corzo for the Cuban Championship, when I was 12 years of age, this is the first time in a match that my opponent has taken the lead, which does at least have the merit of a novelty.’ Corzo’s view on the 1901 match was that they were ‘offhand games’ (El Fígaro, 25 April 1909, page 219).

Finally, it is worth noting that even today the year of the match is often wrongly given as 1900, whereas the correct date, 1901, is confirmed by local newspaper reports. The error may be traced back to the games index of My Chess Career.

In 1902 Corzo retained/regained his national title in a double-round championship tournament, finishing 2½ points ahead of his brother Enrique, and four ahead of Capablanca, who came only fourth. Corzo won both of his individual games against the prodigy, but the scores seem to have been lost.

It is almost certain that another celebrated Corzo v Capablanca brilliancy (game 2a in Reinfeld’s The Immortal Games of Capablanca) did not involve Juan Corzo at all, despite that attribution on page 136 of The Unknown Capablanca. Although the Cuban newspaper Diario de la Marina of 5 February 1902 (evening edition, page 4) claimed that White was Juan Corzo, Juan himself said in the Mexican magazine Ajedrez of February 1938 (page 129) that Capablanca’s opponent had been his brother, Enrique (who had died in the early 1930s).

Ajedrez en Cuba, a scarce book by Carlos Palacio published in Havana in 1960, lists further match results of Juan Corzo: v Ramón Iglesias (1897) +5 –0 =1; v Rafael Blanco (1911) +5 –0 =0. The American Chess Bulletin of May 1912 (page 106) mentions another match against Iglesias, played in 1901, Corzo winning +7 –5 =2. This source also says that Corzo had won casual games from Dr Lasker and Taubenhaus. A number of games between Lasker and Corzo were given in The Collected Games of Emanuel Laskerby K. Whyld, published in 1998.

The following correspondence game against the ‘Club Capablanca’ of Placetas, taken from Crónica de Ajedrez of August 1911 (pages 82-83), is a good example of Corzo’s aggressive style, although here it is unsuccessful. The annotations (written before 5...d5 was discovered – see page 158 of Kings, Commoners and Knaves) are by Corzo:

As regards the annotation by Corzo at move four, the Mieses v Maróczy game at Paris, 1900 was not a Danish Gambit. Corzo was probably thinking of Mieses’ loss in 24 moves at Monte Carlo, 1903.

His only full-scale international tournament was Havana, 1913, where he brought up the rear but produced many of the liveliest games.

Four years later Juan Corzo came second in a small triangular tournament in the Cuban capital, half a point behind C.S. Howell and half a point ahead of Blanco.

Corzo was a prolific journalist who wrote columns in a variety of publications over a 30-year period. His weekly column in the Cuban magazine E1 Fígaro was particularly rich, frequently containing four or five games, two problems and general chess news, all spread out over a full page. He also played a key role in Capablanca-Magazine, which enjoyed a relatively long run (1912 to 1914). Corzo was described as the Administrador.

A good illustration of his play during this period was published in Capablanca-Magazine of 31 December 1913 (pages 235-236):

Corzo sometimes took a board in Capablanca’s simultaneous exhibitions in Havana, and one of the few available scores is the following:

Not long afterwards, Corzo embarked upon a new literary venture. This paragraph appeared on page 463 of the November 1933 BCM:

‘In spite of political troubles, Juan Corzo, ex-champion of the Havana Chess Club, has succeeded in bringing out the first (September) number of a new monthly, Jaque Mate, at the price of $1 a year. Most of the space in this opening issue is given to the games of the historic match Corzo-Capablanca at the end of 1901, begun just before Capablanca’s 13th birthday. There is also an article on “World Champions from Ruy López to Alekhine”.’

Despite considerable efforts, it has proved impossible to trace this magazine, or even to find a reference to it in any Cuban source. (It is unconnected with the Jaque Mate published in Havana in the 1960s and 1970s.)

Corzo is such an obscure figure that it is appropriate that there should even have been confusion over when he died. In reference books the date was regularly given as 27 September 1938 until it was pointed out in C.N. 1085 that the October/November 1944 issue of Capablanca Magazine and issues 7, 8 and 9 of Jaque Mate 1964 contained photographs of Corzo taken on 13 April 1940 and 21 March 1941.

It turned out that Corzo died, in Havana, on 27 September 1941. Capablanca survived him by just five months.


Afterword: This original version of the above article was published on pages 76-78 of the 8/1988 New in Chess.


Eduardo Bauzá Mercére (New York, NY, USA) forwards a game (Havana, 1936) between Juan Corzo and José Antonio Gelabert which the former published on page 129 of the 8/1937 issue of the Argentinian magazine Castles: As shown in our article on David Hooper, C.N. 3227 mentioned a cutting which he sent us for safe keeping on 10 May 1990 regarding a set of games between Capablanca and Delmar. Hooper commented:

‘This is the only written reference I found to a match against Delmar on 27(?) September 1908. It will almost certainly be fromDiario de la Marina(Havana) ... As I understand this match, Capablanca, offering pawn and move, undertook to win every game. I believe he won the match, probably picking up a good stake – he desperately needed money at the time.’ Now, Christian Sánchez (Rosario, Argentina) has forwarded us the remainder of the newspaper item (a report by Juan Corzo in Diario de la Marina, 27 September 1908), together with a full transcription: 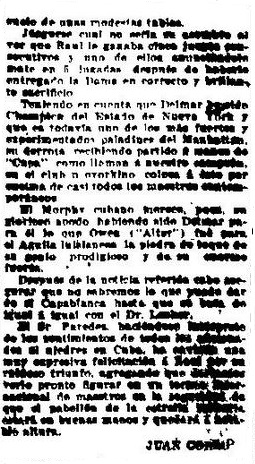 Two further pieces by Corzo in the same Cuban publication: In the chapter on the match in My Chess Career (London, 1920) Capablanca wrote:

Capablanca’s fourth victory was in game 11, before which the match score was +3 –2 =5 in his favour. Even so, he also stated that his fourth win was the final game of the contest: 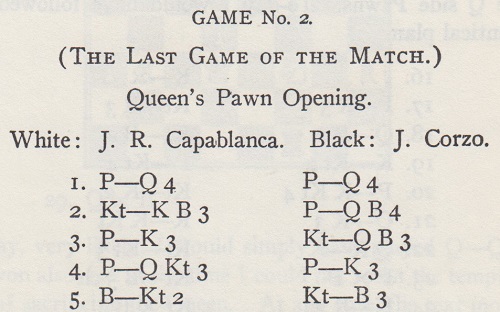 The ‘12.12.’ indicated that, according to Daubar, that draw with the Ruy López was the last of the match. On the same page the Dutch Defence game, won by Corzo, was numbered not 13 but zero (‘0-0’):

The following page explained that the Dutch Defence game was not included in the total match score (which Daubar therefore gave as +4 –2 =6): 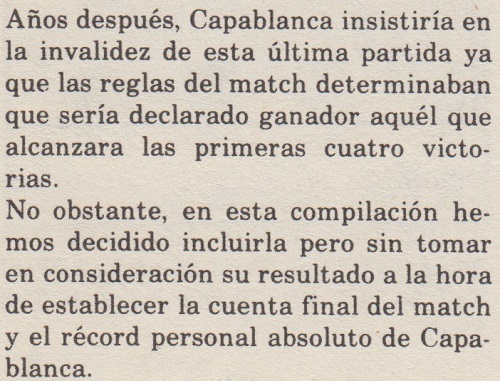 On page 84 of volume one of Capablanca, leyenda y realidad (Havana, 1978) Miguel A. Sánchez wrote that 5½ points were required to win the match and that, therefore, a draw in the 12th game was enough for Capablanca:

This does not make sense because after 11 games Capablanca already had 6½ points.

In José Raúl Capablanca. A Chess Biography (Jefferson, 2015) Sánchez asserted on page 84 that by drawing the 12th game Capablanca won the match:

There was this endnote on page 506:

As shown below, page 4 of Diario de la Marina of 16 November 1901 did indeed state that the winner of the match would be the player who made the better score from seven games, draws not counting: 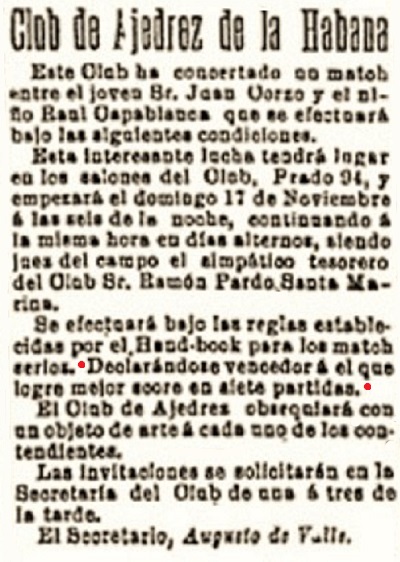 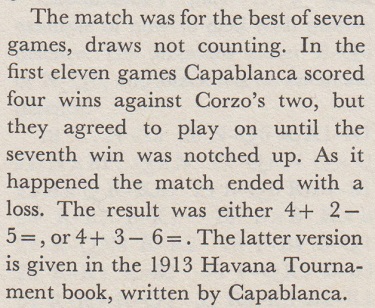 However, page 80 of a Spanish version of Miguel A. Sánchez’s McFarland book, entitled Capablanca, leyenda y realidad (Havana, 2017 – although it did not appear until 2019), had the following about game 12:

The corresponding endnote 39 on page 96 affirms that in the Havana Chess Club it was customary to play out all the games of a match even if the final overall result of the contest would not be affected:

Although that clarification was provided to explain why game 13 was played, it could also have been applied to game 12.

In short, it seems to me that contrary to what Daubar and Sánchez have written, the final score must either include both games 12 and 13 or exclude both. It is illogical to include only game 12.’


Yandy Rojas Barrios has provided an article by Juan Corzo y Príncipe, written after Emanuel Lasker announced his resignation as world champion, on pages 47 and 76 of Social, July 1920: Another version, from our archives: