The meaning of en prise is obvious and easy to explain, or is it? English-language dictionaries give simple but serviceable definitions, such as ‘Exposed to capture’ and ‘In a position to be taken’, but some chess books aim for more and achieve less. From page 102 of Chess Thinking by Bruce Pandolfini (New York, 1995):

‘En Prise: “In take.” A French term indicating an undefended unit in position to be captured.’

Page 55 of Chess: How to Improve Your Technique by Frank Brady (New York, 1974) was no more successful:

‘En Prise: a French expression meaning ‘in taking’ – when a piece or a pawn is under direct attack and is left unprotected, it is said to be en prise (pronounced en-pree).’

‘In taking’ and ‘unprotected’ are as inappropriate as Brady’s pronunciation guide (since prise rhymes, more or less, with ‘keys’).

Yet even some prominent authorities have disagreed about what the term signifies. In Harry Golombek’s The Encyclopedia of Chess (London, 1977) the entry for ‘en prise’ (written by H.G. himself) stated:

‘When a player unintentionally places a piece where it may be captured, then he is said to put the piece en prise.’

The word ‘unintentionally’ was then disputed by W.H. Cozens but defended by a contributor to the Encyclopedia, Wolfgang Heidenfeld. (For their discussion, see the BCM, September 1978, page 402; April 1979, page 175; July 1979, page 311.) After all that, Golombek dropped ‘unintentionally’ from the paperback edition of his Encyclopedia, although the word (and much else besides) was the subject of an unwise reprise in Nathan Divinsky’s desperate and desperately imitative 1990 volume The Batsford Encyclopedia of Chess.

Finally, a little-known game to illustrate the theme: 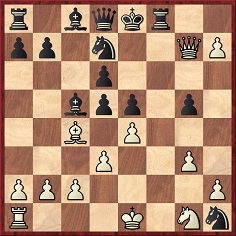 Source: BCM, December 1911, page 462. The magazine wrote: ‘Rarely have we seen such a series of offered sacrifices as in this spirited encounter.’


A strange game occurred between P.S. Leonhardt and E. Znosko-Borovsky in Ostend on 27 June 1906:


The mispronunciation of en prise seems particularly prevalent in United States sources, as a web search for ‘on pree’ will show. As regards chess books, the most recent occurrence of this error that we have seen is on page 167 of Portable Chess Coach by Judee Shipman (New York, 2006).

As usual, the Collins English Dictionary is impeccable: See C.N. 3205 (Chess Jottings) and C.N. 3565 for a discussion of a magazine edited by Daniel Fiske entitled Í Uppnámi (which is Icelandic for en prise).