A Brilliancy by Hermann Helms

The diagrammed position on the cover of W.E. Napier’s book comes from a famous miniature won by Hermann Helms, and Napier wrote: ‘Besides brilliancy, there is a debonair flow from the first move.’ Giving the score on pages 192-193 of The Golden Treasury of Chess (Philadelphia, 1943) Francis J. Wellmuth observed: ‘A most extraordinary game in that the final moves were wholly unexpected.’

There are many discrepancies in the details surrounding the game. Pages 213-214 of the (truly dreadful) book Treasure Chess by B. Pandolfini (New York, 2007) stated that the opponent of ‘Herman Helms’ (Hermann is the correct spelling) was ‘Samuel Smyth’. Some sources give the surname as ‘Smith’. See, for instance, pages 183-184 of the Schachjahrbuch für 1915/16 by L. Bachmann (Ansbach, 1917), which had ‘J. Ferguson Smith’. Similarly, when the game was published on page 138 of Schnell Matt! by C. Hüther and L. Bachmann (Leipzig, 1924) White was named as ‘J.F. Smith’. On the other hand, ‘J.F. Smythe’ was the version offered when the game was included on page 185 of the July-August 1919 issue of the American Chess Bulletin (editor: H. Helms). However, that was an item reproduced from the New York Evening Post, with the moves merely incorporated within an annotation to another game.

An early appearance of the Helms miniature in a chess book was on pages 97-98 of Chess by David A. Mitchell (Philadelphia, 1917). He stated that White was J.F. Smyth, and a specific date for the game was given: 23 May 1915. Working backwards, we have found the score (probably its first publication) on page 3 of the Brooklyn Daily Eagle, 10 June 1915. Helms’ chess column in that newspaper identified White as J. Ferguson Smyth and stated that the miniature was a practice game played at the Manhattan Chess Club on 28 May 1915:

‘I wish our friend, the perpetrator of this deed, would relate to us the immediate reactions to this move [22...Qg2+] i.e. how did his opponent take it, the audience, etc., etc.’

‘The encounter was between James F. Smyth and H. Helms at the Manhattan Chess Club, then in the Carnegie Hall Building, early in this century. It was played as a practice game at the invitation of the former, who was to take part in the annual match with Philadelphia. Smyth, a transplanted Englishman, took his defeat like a good sportsman. A certified public accountant, his travels took him to the Pacific Coast, where he died in San Francisco.’

The match referred to was held in Philadelphia on 30 May 1915. Unfortunately, no player named J.F. Smyth was listed in the report on page 131 of the July-August 1915 American Chess Bulletin, although one member of the Manhattan Chess Club’s team was ‘M. Smith’.

This photograph comes from page 152 of the July-August 1917 American Chess Bulletin:

On page 50 of the February 1963 Chess Life John W. Collins wrote that in 1950 Santasiere produced an oil painting of the position preceding 22...Qg2+, and page 34 of the February 1963 Chess Review reported that the painting ‘hangs in the Marshall Chess Club’. Santasiere’s obituary on page 160 of the March 1977 Chess Life & Review related that ‘he had painted over 400 canvases’, but what details can be found about a painting depicting the Helms game?

As regards the 23-move brilliancy, the evidence currently available suggests the following:


From a ‘Chess Movies’ article on the inside front cover of the January 1959 Chess Review: Concerning the painting by A.E. Santasiere depicting the game in question, Ronald Young (Bronx, NY, USA) reports that he saw the picture hanging in the Marshall Chess Club in 2003 and noted that the position reproduced was not precise. He asks whether a photograph can be obtained.

We are grateful to Frank Brady (New York, NY, USA) for taking the following photograph of the painting, which is still in the Marshall Chess Club’s possession: ‘Now comes an unusual finish, which was as pleasing to the loser as it was to the winner.’

Where did Helms make that remark?


Pages 101-102 of Chess Tactics by Alexander Kotov (London, 1983) gave the conclusion of the game with the diagram caption ‘Composed position.’


Further to the description of Hermann Helms on page 8 of the New York Post, 14 February 1942 as the ‘dean of the American chess press’ (C.N. 10786), we mention, firstly, a fine, extensive tribute to him (‘the undisputed Dean of American Chess’) by Frank Brady on pages 3-4 of Profile of a Prodigy (various editions). As shown below, however, the word ‘undisputed’ may be disputed.

Helms received the title officially at a testimonial dinner on 20 August 1943. From page 278 of the October 1943 Chess Review:

‘In recognition of his remarkable record and long devotion to the cause of chess, President Sturgis of the USCF conferred on Hermann Helms the official title of Dean of American Chess.’ 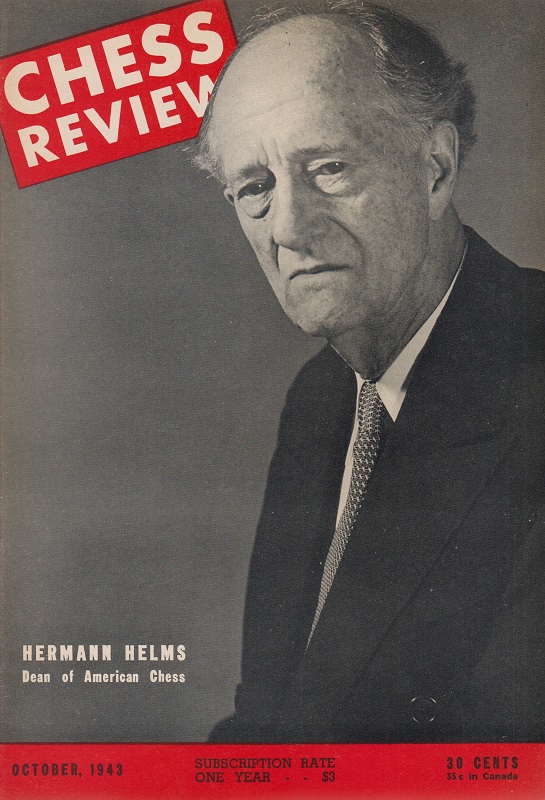 Page 67 of the March 1943 Chess Review referred to Frank James Marshall as the ‘Dean of American Chess’. Marshall, incidentally, was a speaker at the dinner at which the title was bestowed upon Helms (American Chess Bulletin, September-October 1943, page 73). 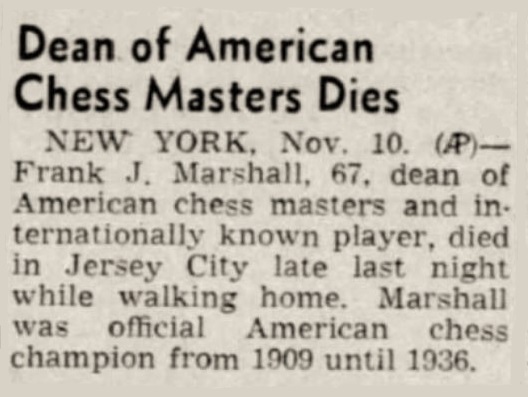 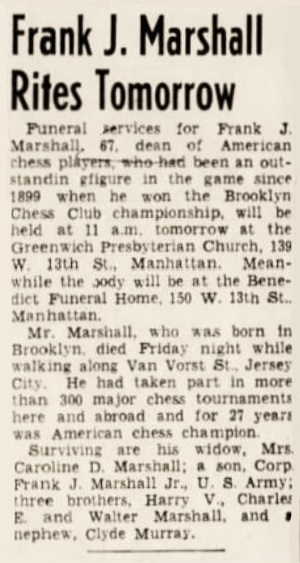 Reuben Fine was incorrect when he wrote on page 190 of The World’s Great Chess Games (New York, 1976) that Marshall ‘remained the dean of American chess until his death in 1943’.

‘Dean of American Chessmasters’ was the description of Abraham Kupchik on the front cover of the May 1949 Chess Review: 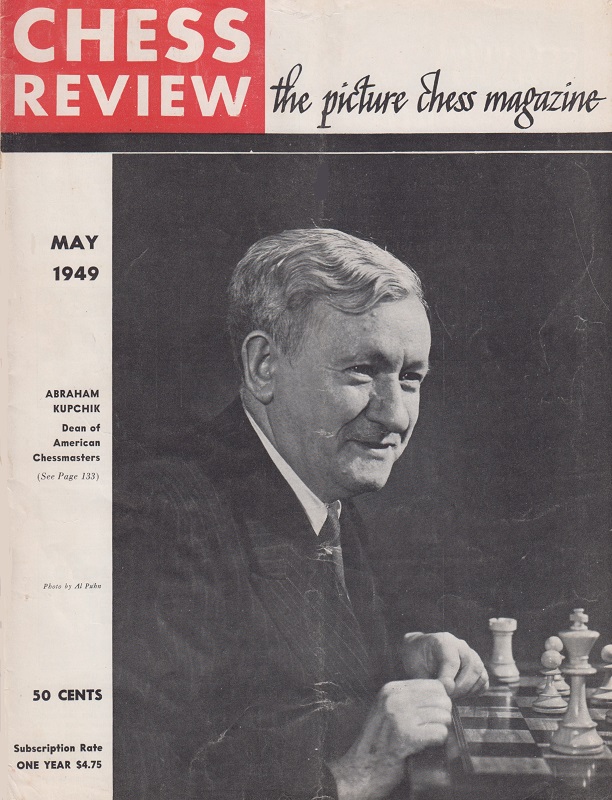 The corresponding article on page 133 stated: ‘Oldest and most durable of the masters competing in this series [Metropolitan Chess League matches] is Abraham Kupchik, dean of American chessmasters.’

How much significance or value the ‘dean’ title ever had is another question. As regards the perks, if that word is not too strong, on page 33 of the February 1963 Chess Life John W. Collins referred to Helms as ‘the Dean, an Honorary Member of all clubs in the United States’.

On page 31 of the same issue William Lombardy suggested that Helms, the ‘Dean of American Chess’, was ‘the Chess world’s most loved figure’: 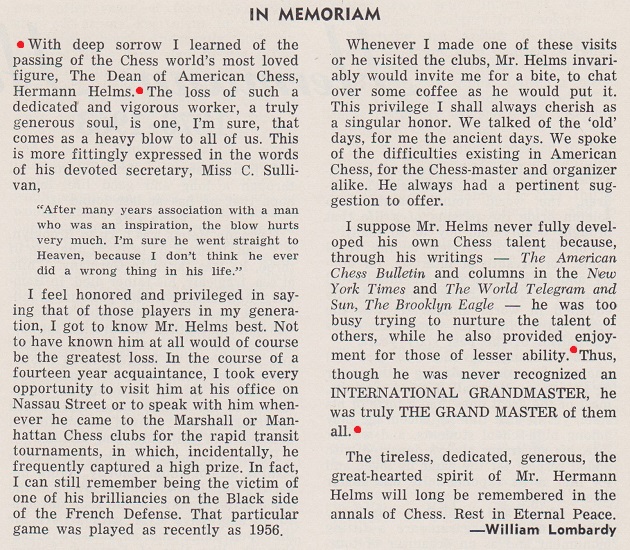 The brief notice of Helms’ death on page 72 of the March 1963 BCM had no geographical restrictions: he was ‘the doyen of all chess journalists’.