‘Writing in the New York Times, 8 May 1988, in a review of the musical Chess, Harold Schonberg, referring to Vera Menchik, says the following:

‘For some reason there never has been a great woman chess player. There have been such talented ones as Vera Menchik, the Russian who at one time or another had victories against the best – Capablanca, Alekhine and the other giants of the 1930s – but she never was able to win an international tournament.’

Although the members of the “Vera Menchik Club” included any number of notables, neither Capablanca nor Alekhine ever made the list.’

Writing about the Club on page 212 of Grandmasters of Chess (Philadelphia and New York, 1973) Schonberg had not made the mistake about Capablanca and Alekhine.


Chess writers seldom compose more than a few lines about Vera Menchik without mentioning that male players defeated by her became, ipso facto, members of the Vera Menchik Club, but what is known for sure about the origins of this cardinal component of chess lore?

The passage below is from page 313 of The Encyclopaedia of Chess by A. Sunnucks (London, 1976):

‘The following year [1929] she played in Paris and Carlsbad, and it was at Carlsbad that the famous Menchik Club was formed. The invitation to Vera Menchik to compete among such players as Capablanca, Euwe, Tartakower and Nimzowitsch was received with amusement by many of the masters. The Viennese master Becker was particularly scornful, and in the presence of a number of the competitors he suggested that anyone who lost to Vera Menchik should be granted membership of the Menchik Club. He himself became the first member. Other famous players who later joined the club were Euwe, Reshevsky, Sultan Khan, Sir George Thomas, C.H.O’D. Alexander, Colle and Yates.’

At Carlsbad, 1929 Vera Menchik finished last with a score of +2 –17 =2. On page 64 of the 4/1980 Boletín Ajedrez Radio Rebelde José Luis Barreras purported to quote the exact words of an announcement by Albert Becker:

‘When the tournament is over, I propose to open the Vera Menchik Club, whose members will be solely masters defeated by the lady world champion.’

We have yet to find any such reference in 1929 sources, although on page 19 of the Carlsbad, 1929 tournament book Hans Kmoch wrote:

By the early 1930s the Club was becoming a familiar piece of whimsy. For example, the following appeared in a report about Hastings, 1930-31 on page 54 of the February 1931 BCM:

‘Sir George Thomas once again lost to Miss Menchik and is now acclaimed as president of the “Menchik Club” – the membership of which is strictly limited to victims of the woman champion.’

Tartakower (a participant in Carlsbad, 1929) wrote a few lines about the Menchik Club on page 70 of Neue Schachsterne (Vienna, 1935), but without indicating who had originated it.


The frontispiece of the February 1926 BCM: 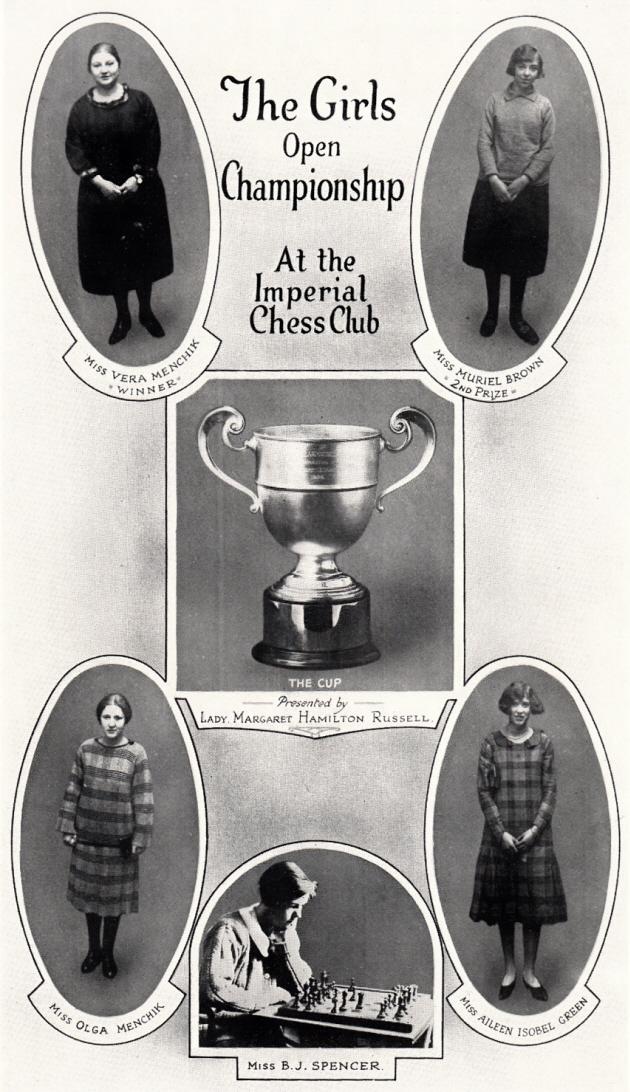 Max Euwe mentioned the Club on page 110 of the April 1953 Chess Review:

‘We know that Vera included in her list of victims the names of a number of reputable masters forced, in one contest or another, to bite the dust.

It has more than once been suggested that these losers band themselves together to form a “Menchik” Club, pressing me, as a two-time loser (Hastings, 1930-31 and Hastings, 1931-32), to become its president. These plans have remained plans.’

For reasons undisclosed, the account of the Club on page 237 of Impact of Genius by R.E. Fauber (Seattle) asserted that Vera Menchik ‘outraged the male players by accepting an invitation to the great Carlsbad, 1929 tourney’.

On pages 18-19 of Women in Chess (Jefferson, 1987) John Graham stated that at Carlsbad, 1929 Becker ‘jokingly suggested that if anyone lost to her they would be inducted into the Vera Menchik Club’. Graham concluded:

‘Menchik did not have a good result in the tournament, and finished in a tie for last place with Vasja Pirc, Gideon Stahlberg and others.’

In reality, Vera Menchik finished alone in bottom place at Carlsbad, 1929, three points adrift. Neither Pirc nor Ståhlberg played in the tournament.