Even more candid than his published writings, letters from Tony Miles came to us from England, Germany, Switzerland and Australia. One dated 22 March 1990 began:

‘Many thanks for your letter of 26/2. Sorry for the delay in replying but I’ve been busy winning tournaments.’

All kinds of issues cropped up, but on two particular matters he was interested in receiving research assistance. The first of these he outlined on 15 July 1989:

Miles’s battles with certain British Chess Federation officials have eventually become fairly well known. They emanated from a scandal at the 1985 Interzonal tournament in Tunisia. Although Miles demonstrated exceptional forensic skills in proving his accusations of impropriety, it was an uphill, debilitating struggle to deal with his opponents’ self-serving secrecy, guile and worse. In the context of his request for relevant documentation he commented to us in a letter dated 24 July 1989:

‘Perhaps I should mention that I spent several months in hospital from the end of September 87 – a result of banging my head against a bureaucratic brick wall – and am especially ill-informed for that period.’

‘Basically I would like to demolish the “English Chess Mafia” and reorganise it on an honest basis. I already have a completely clear-cut case of fraud against *****, blatantly covered up by a deeply implicated ********, both damned by their own words.’

The following month (13 September 1989) he made a remark which is a striking reminder of life in the pre-Internet age, at a time when much of the British chess press preferred to sweep inconvenient truths under the carpet. He noted the difficulty of putting across his case anywhere ‘apart from Kingpin, Inside Chess or the odd joker I may have in my pack’.

His project continued but, as he noted in a letter dated 17 September 1991, ‘keeps running into ultra sensitive legal departments’.

Kingpin, at least, was a fine outlet for his writing, and after Miles’s death a tribute by the magazine’s Editor, Jonathan Manley, concluded with these words:

‘I shall miss not only his writing but also his phone calls which, like many of his articles, were hilarious commentaries on the latest absurdity in the chess world. He once called me from his bath (!) to report that he had been reading Kingpin and had laughed so much that he had just dropped it in the water. I don’t think that the magazine has ever been paid a finer compliment.’

Those words appeared at the Chess Café, where Miles was a monthly columnist throughout the final phase of his life. His articles are still available on-line in that website’s archives section.

In 1999 it had occurred to us that Miles would prove to be a star performer on the Internet and that there would be no better home for him than the Chess Café. With the agreement of Hanon Russell, the founder of that site, we therefore asked Miles whether he would consider becoming a columnist. He responded positively on 29 May 1999, ‘given that my literary output has been largely curtailed by being fired’ (by Dominic Lawson, the then Editor of the Sunday Telegraph), adding: ‘I will be at home for a while (I picked up something resembling dysentery in Cuba so am lying around feeling sorry for myself!) and a bit of writing would be most convenient.’

Hanon Russell quickly came to an agreement with Miles on terms, and the ‘bit of writing’ turned out to be a memorably successful monthly column which continued until Miles’ death in November 2001.

A number of obituaries and other articles at that time, some of which were deplorable, contained points which prompted us to recall random paragraphs in his letters. For example, a full-page article by Andrew Alderson in the Sunday Telegraph of 18 November 2001 (page 22) stated:

‘There were even dark rumours – never substantiated  – that he had deliberately lost games in return for financial reward.’

It may be wondered why any writer would even consider disseminating dark, unsubstantiated rumours about somebody who had just died, but, in any case, it is worth noting what Miles wrote to us in a letter dated 15 July 1989:

‘Lastly, though of no particular importance to me, it is sometimes interesting to know what is “known” about oneself. For instance I recall an occasion when a certain person – you’d never guess who – spread a story that I had “sold” a game for a very large sum of money. It was many years before anyone told me about it and I was able trivially to disprove the allegation. The damage to my reputation was considerable.’

It was mentioned above that Miles requested research assistance on two matters. The second of them concerned blindfold chess. Although it was barely reported at the time, in 1984 he played 22 games simultaneously sans voir in a display in Roetgen, Germany, scoring ten wins, ten draws and two losses. A decade later he wrote an article about ‘this little-known feat’, on pages 36-39 of the February 1994 CHESS. It may also be found on pages 167-172 of the anthology of his writings, Tony Miles ‘It’s Only Me’ compiled by Geoff Lawton (London, 2003).

Below is a sample page of the print-out:

There follows the full set of 22 games:

For further information about the exhibition in Roetgen, see Blindfold Chess by Eliot Hearst and John Knott (Jefferson, 2009). Towards the end of his life his interest in chess waned. In an e-mail message dated 10 January 2001 he told us: ‘I am playing more bridge than chess these days (bit bored!).’

As it happens, though, the blindfold display was the subject of the last communication we received from him, an e-mail message written on 4 November 2001, about a week before he died:

‘Actually the display was very well organized. I played in a sound proofed booth, with no access to score sheets. (I recall Kolty saying to me dismissively that Najdorf had such access in his displays, and commenting that he could do 100 like that!) It took about 11.5 hours, the scheduled start being noon, and finishing shortly before midnight. I was told that the average rating of my opponents was about 2000, but I have no idea of the breakdown.’

This article originally appeared, with some minor textual differences, at ChessBase.com in 2011.


From the above-mentioned letter to us from Miles dated 22 August 1989:

As mentioned in Cuttings, below is an extract from Raymond Keene’s Spectator column of 8 August 1987, page 44:

Regarding the Dover edition of The Delights of Chess (New York, 1974), we own a copy inscribed by Assiac to Jana and Tony Miles: 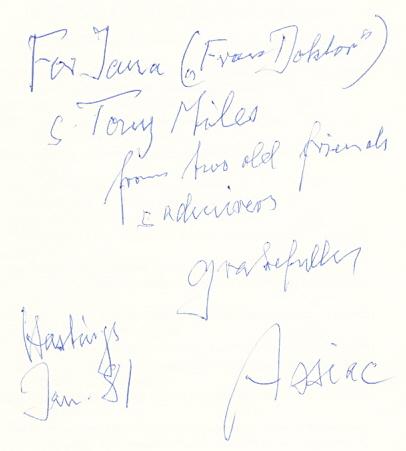 ‘... I have a strong tendency to look at crazy things first. When promoting a pawn I prefer a bishop to a queen if that is possible ... I am very fond of, let us say, three rooks on the board. In a weekend tournament I had that once, and instead of resigning my opponent allowed himself to be mated beautifully, in the middle of the board. That appeals to me.’

The comments were reproduced on page 22 of Tony Miles: ‘It’s Only Me’ compiled by Geoff Lawton (London, 2003).


The book mentioned in the previous item quotes two two-word remarks by Miles which have resonated. The first, on page 261, is a book review reproduced from the Autumn 1998 Kingpin, page 56. It can also be read at the lively new Kingpin website.

Chapter 3 of Tony Miles: ‘It’s Only Me’ is entitled ‘A cable’, referring to a well-known story about Dubna, 1976 (related on page 14). Prior to his departure for the tournament he was asked (by Eddie Penn, according to the book) to send a cable if he succeeded in qualifying for the grandmaster title. In due course, one was received from Dubna:

Are further details available and, in particular, has the message been kept?

By becoming a grandmaster, Miles won the £5,000 prize offered by J.D. Slater. Reporting this, CHESS (March 1976, page 173) added, ‘not to mention Faber’s £1,000 in advance royalties for a book’. What subsequently happened is unclear; no such work was ever published by the company.

Edward Penn (London) informs us that he asked Miles, prior to his departure for the Dubna, 1976 tournament, to send him a cable if he obtained the grandmaster title.

Miles’ message was indeed two words (‘A cable’). Mr Penn’s recollection is that Miles, a close friend, signed not with his full name but simply with ‘Tony’. However, he has not yet been able to find the cable to confirm this. 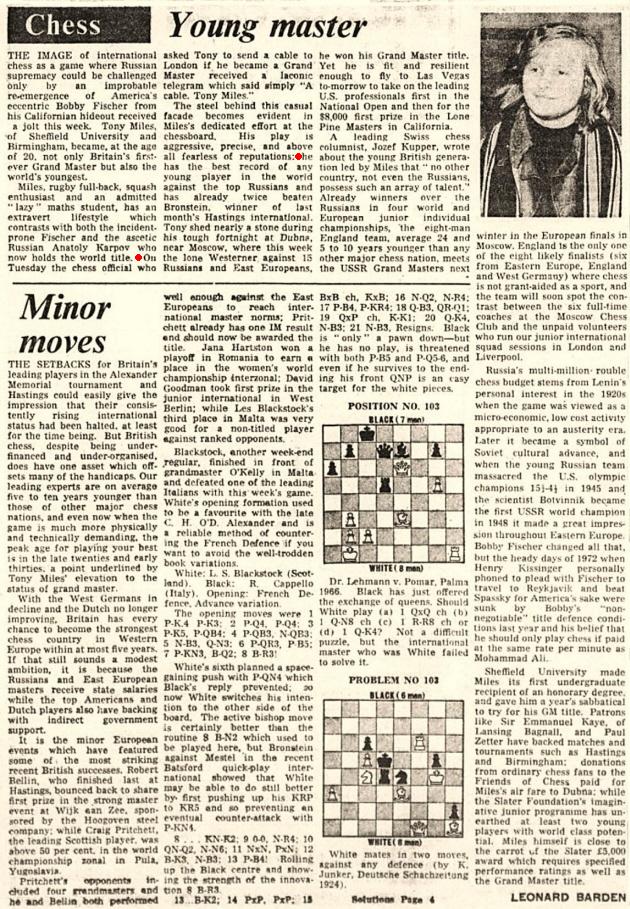 Quite by chance we have just discovered the following:

‘On Tuesday the chess official who asked Tony to send a cable to London if he became a Grand Master received a laconic telegram which said simply “A cable. Tony Miles.”

The steel behind this casual facade becomes evident in Miles’s dedicated effort at the chessboard. His play is aggressive, precise, and above all fearless of reputations ...’

‘A British chess federation official who had asked Miles to send a cable to London if he ever became a Grandmaster received a laconic telegram which simply read “A cable. Tony Miles”. The steel behind this casual facade becomes evident in Miles’ dedicated effort at the board – aggressive, precise, and above all fearless of reputations.’

‘A British Chess Federation official who had asked Miles to send a cable to London if he ever became a Grandmaster received a laconic telegram which simply read “A cable. Tony Miles”.

The steel behind this casual facade becomes evident in Miles’ dedicated effort at the board – aggressive, precise, and above all fearless of reputations.’

Page 6 of The English Chess Explosion stated, ‘we would like to thank Leonard Barden for permission to quote from his articles in The Guardian and The Financial Times’. The above, of course, is not a case of ‘quotation’.

‘In November, Tony Miles accepted a £500 challenge to a match at a new game called Othello, losing by 1-2 – an amazing achievement considering that his opponent was unofficial Othello world champion.’

The reference to ‘November’ was incorrect, given that the match, against Fumio Fujita, had been reported in a ‘Diary’ item by P.H.S. on page 14 of The Times, 21 October 1976.


A picture from our collection: 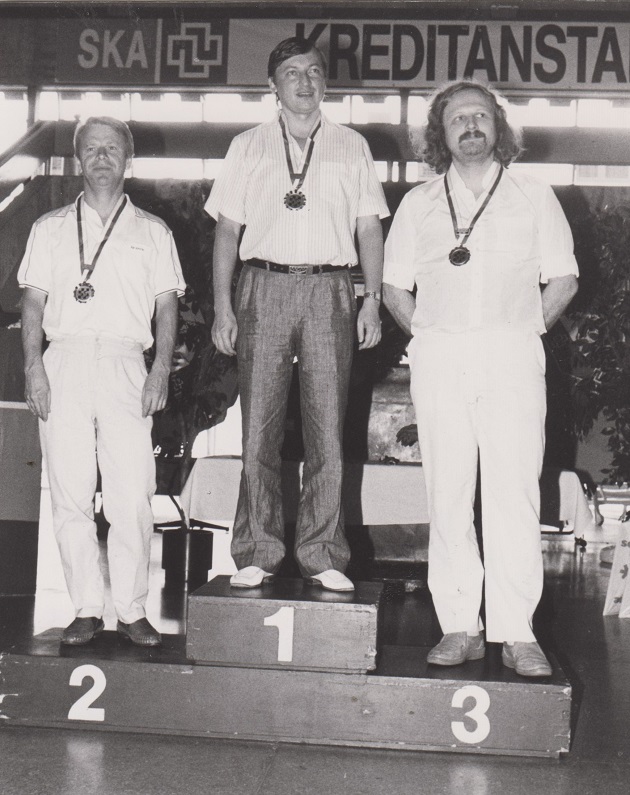 
One of our copies of the 1974 Dover reprint of The Delights of Chess by Assiac has a full-page signature by Tony Miles: 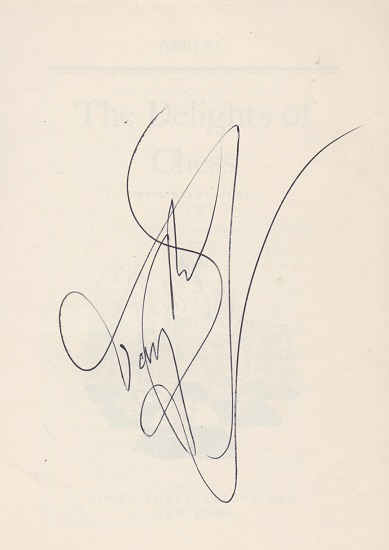 We are grateful to Olimpiu G. Urcan (Singapore) for sending three portraits of Tony Miles, which are reproduced here with the permission of the Daily Express archive: