‘The Mozart of Chess’

Christian Sánchez (Rosario, Argentina) enquires about the origins of a nickname given to Capablanca, ‘The Mozart of chess’, and wonders when it was first used. We plan to revert to that matter later on, and readers’ assistance with citations will be welcomed. Firstly, though, we would point out that the term has been applied to many masters. Some examples:

Page 305 of the August-September 1884 BCM had stated: ‘What Mozart, as to innate, natural ability, was to music, Morphy likewise was to chess.’

‘Spassky has been called the Mozart of chess.’
Page 65 of Bobby Fischer Goes to War by D. Edmonds and J. Eidinow (London, 2004).

‘In January 2004, I called Magnus Carlsen the Mozart of chess for the first time. It was a spontaneous, last-minute decision to meet a deadline for my column in the Washington Post. The name was picked up immediately and spread around quickly. It was used, misused, overused.’
Lubomir Kavalek, article dated 23 February 2012.

The material was not in the German edition (Hamburg, 2017).


We have yet to find Capablanca being described during his lifetime as ‘the Mozart of chess’. As regards other comparisons, Thomas Niessen (Aachen, Germany) supplies the following:

‘Loyd’s problems constantly remind us of Mozart’s music: there is the same lack of everything commonplace, forced or manufactured; the same feeling, within us, that these productions, as it were, composed themselves.’


Ivor Goodman (Stevenage, England) asks about the earliest occurrence of the term ‘Mozart symphony’ to describe a chess game. He draws attention to a remark by Reuben Fine on page 162 of Chess Marches On! (New York, 1945):

‘The following game, played in a recent Dutch tournament, is as graceful and pleasing as a Mozart symphony. Euwe has produced a masterpiece of force and elegance.’

We note, firstly, that Fine originally published those words on page 76 of Chess Review, March 1943 when introducing the game in question. In both the magazine and the book, Fine named Black as ‘Van Stenis’, instead of van Steenis. Chess Review merely stated that the game was ‘played in a recent Dutch tournament’. Chess Marches On! referred to the occasion as ‘The Netherlands, 1942’, and databases have followed suit, although Al Horowitz correctly labelled the game ‘Amsterdam, 1941’ on page 505 of Chess Openings Theory and Practice (New York, 1964).

The score was published on page 5 of De Telegraaf, 8 September 1941:

A few of Fine’s comments on page 77 of the March 1943 Chess Review are notable: As discussed in C.N. 8726, Fine had called discovered check ‘the dive-bomber of the chess board’ on page 112 of his book Chess The Easy Way (Philadelphia, 1942). For Nimzowitch’s ‘laziest king’ remark about double check, see C.N. 8652.

Concerning ‘Mozart symphony’, we recall no earlier use of the expression to describe a chess game. It became especially familiar in 1972 after the sixth game in the Spassky v Fischer match. The following, for instance, was on page 8 of the Sunday Times, 30 July 1972:

This report by a ‘Sunday Times Chess Expert’ stated regarding Fischer’s victory:

‘It was so beautifully played that it moved the Argentine grandmaster, Miguel Majdorf [sic], to say it reminded him of a symphony by Mozart, although he did not specify which.’

Arturo Pomar has been described as ‘el Mozart del ajedrez’.

Regarding Morphy, the following comes from page 37 of Great Moments in Chess by Fred Reinfeld (New York, 1963):

‘In Morphy’s games, especially those against weaker players, there is a Mozartean élan and grace that no-one can resist.’


‘Bobby Fischer: The Mozart of Chess’ was the heading of the chapter about him on pages 366-371 of The Jew in American Sports by Harold U. Ribalow (New York, 1959): The chapter took its title from Harold C. Schonberg’s New York Times article of the previous year which is referred to in C.N.s 5491 and 7645.


Courtesy of Christian Sánchez (Rosario, Argentina), our feature article will now have a reference to Kasparov, although the citation is flimsy. From page 275 of Garry Kasparov on Garry Kasparov Part I: 1973-1985 (London, 2011): Russian-language additions have come from Yuri Kireev and Mikhail Sokolov (Moscow), with regard to Capablanca, Fischer and Reshevsky.

A comparison between Capablanca and Mozart appeared in a biography of Prokofiev by Sergei Morozov (Leningrad, 1967). Page 60 stated, without a source, that at St Petersburg, 1914 the young Prokofiev, delighted with the play of Capablanca and Lasker, wrote an article for the newspaper Den which equated Capablanca with Mozart, and Lasker with Bach; however, for personal reasons Prokofiev did not send the note to the newspaper. 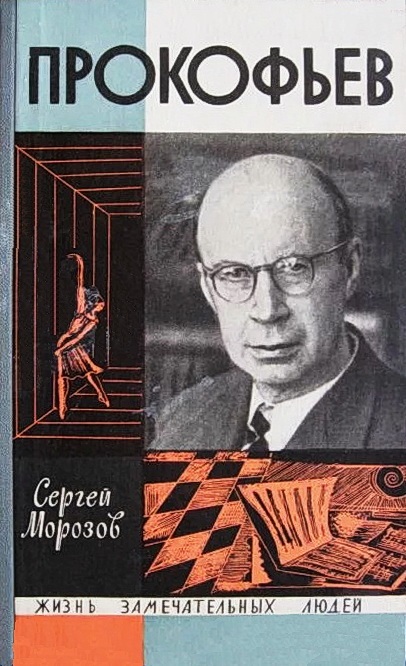 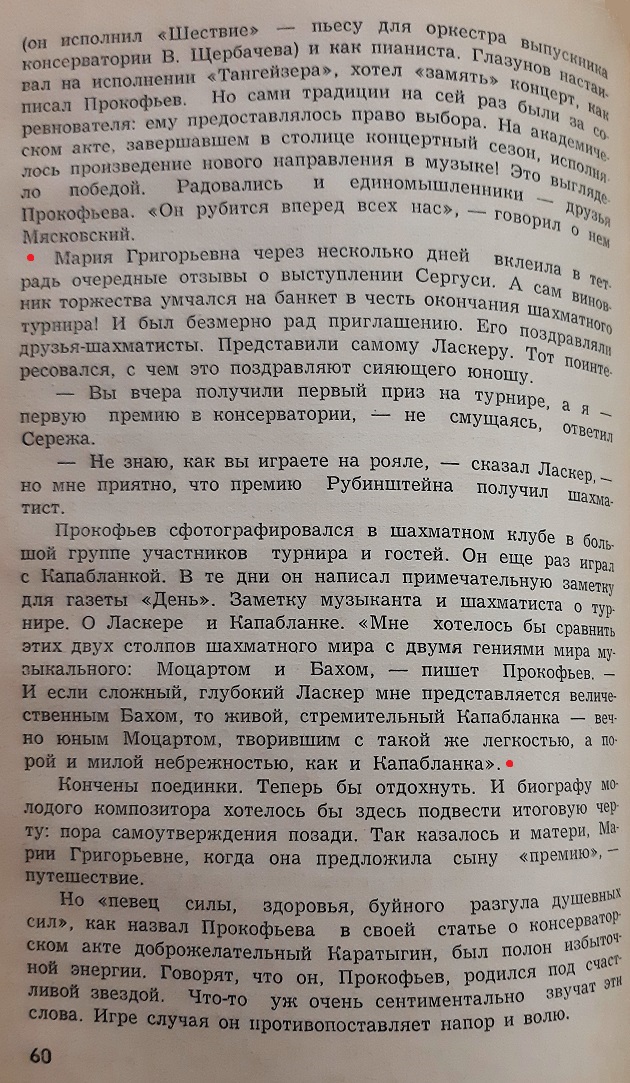 On page 4 of the 52/1974 issue of 64, in an article about Prokofiev and St Petersburg, 1914 by M. Petrova, Prokofiev’s note about Capablanca and Lasker was cited, with a source specified: the composer’s personal collection in the Central State Archive of Literature and Art of the USSR (TsGALI): 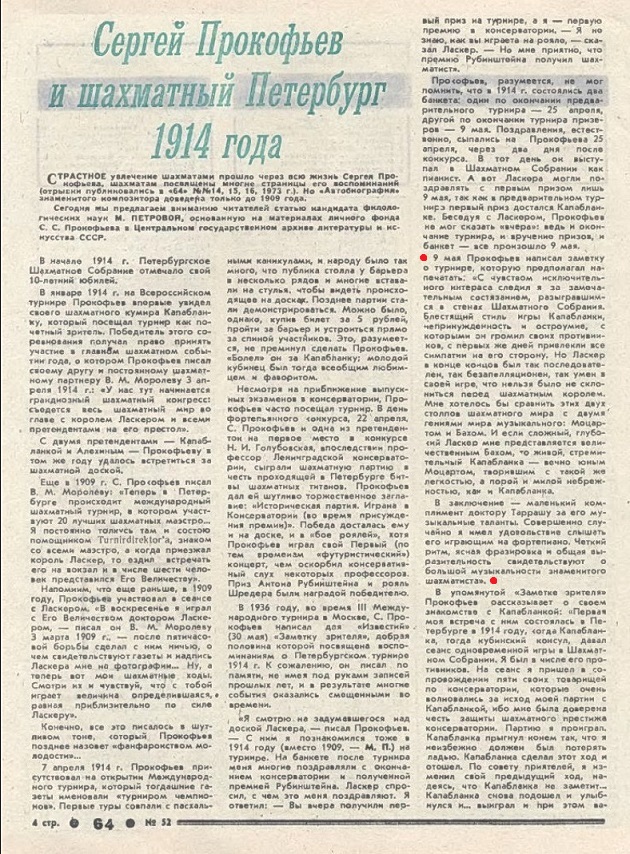 The same information as in 64 was on page 41 of Y. Sviatoslav’s monograph on Prokofiev and chess (Moscow, 2000): 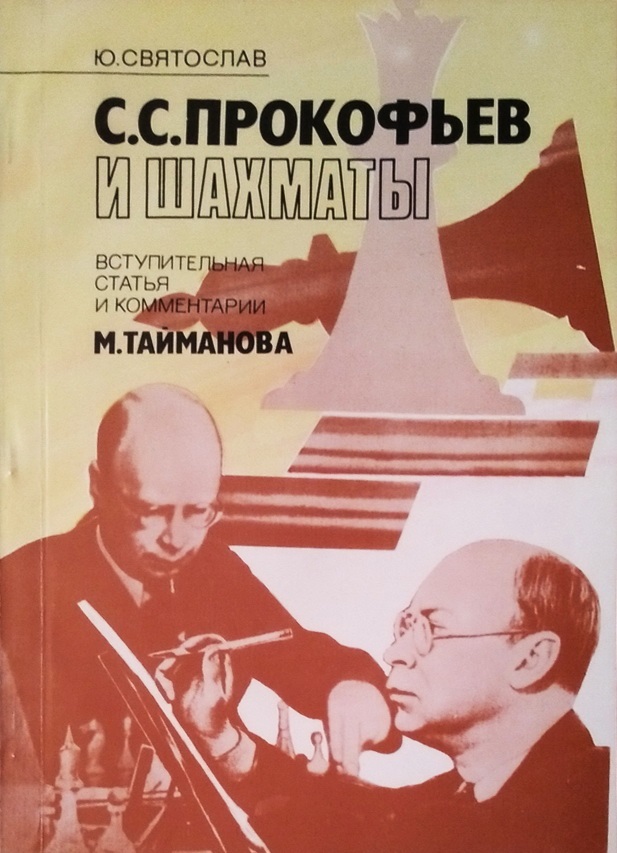 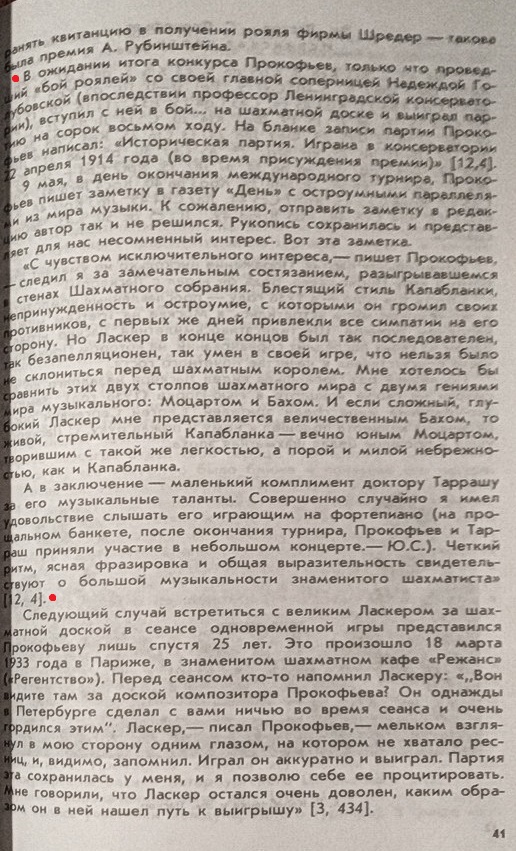 ‘The question that arises is what date should be considered the first appearance of Prokofiev’s comparison of Capablanca with Mozart. From unsourced information in a book by Morozov (1967), from the 1974 article by Petrova, or from the note by Prokofiev in 1914 (the original of which we have not found)?’

Regarding Fischer, they point out that a slightly updated translation of H.C. Schonberg’s 1958 New York Times article ‘Fourteen-Year-Old “Mozart of Chess”’ (C.N. 5491) ...

... was published on page 52 of the 22/1958 issue of America (with the author’s name given as ‘Nonberg’), accompanied by a photograph of Fischer in play against Rodolfo Cardoso: 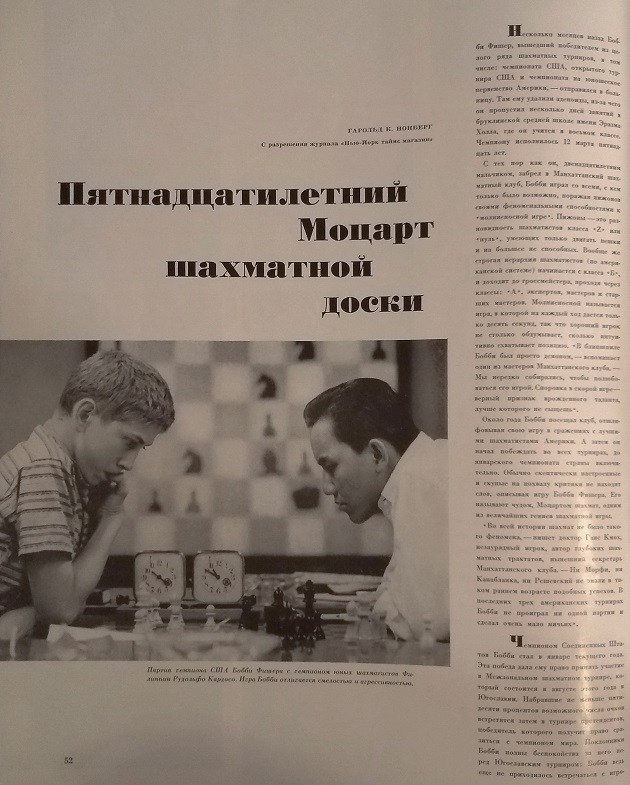 Finally, Mr Kireev and Mr Sokolov note that Reshevsky was called the Mozart of chess on the cover of the 2/2005 issue of Sportivnaya zhizn v Rossia in connection with an article on page 46 by E.Y. Gik, ‘Chess Wunderkind’ (which did not itself mention Mozart): 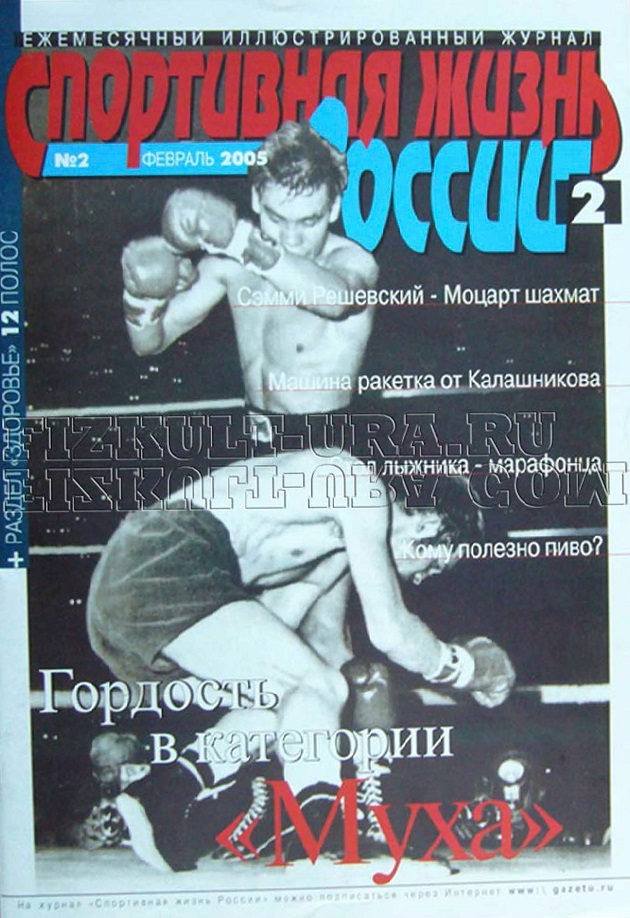 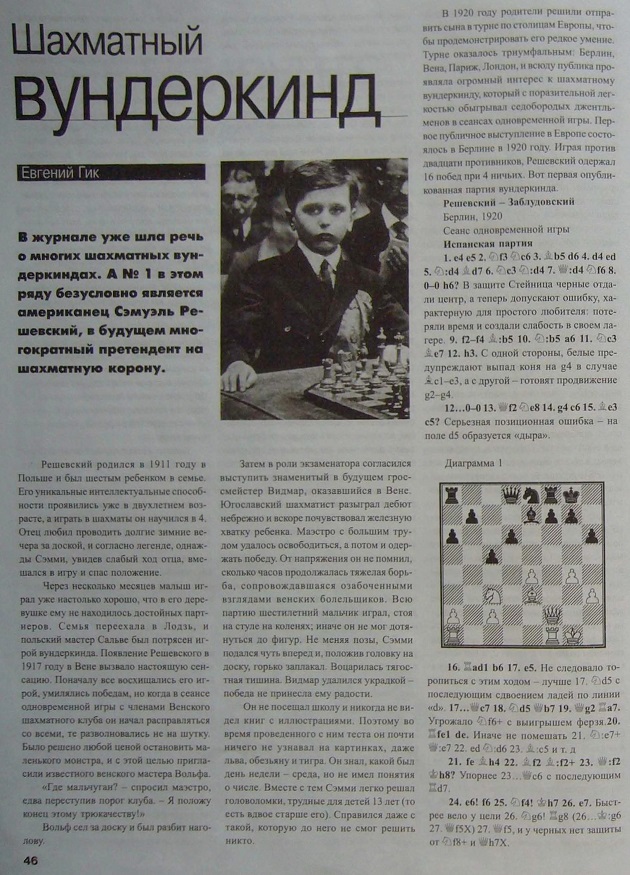