Pierre Bourget (Quebec, Canada) supplies a depiction of the London, 1899 tournament, from page 11 of the Montreal Weekly Witness, 18 July 1899: 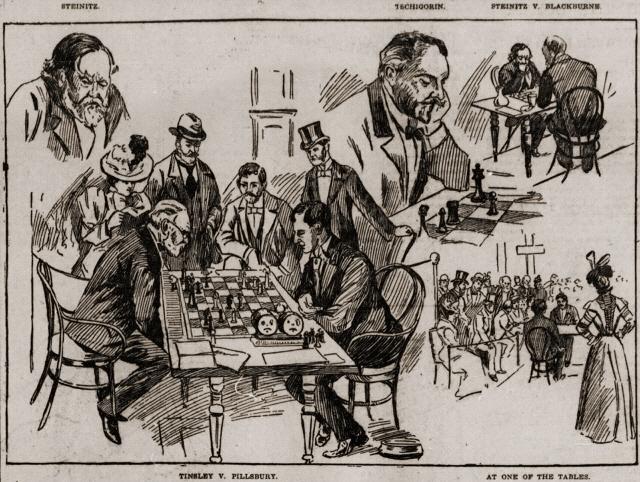 A comment by William Lombardy on page 121 of the April 1969 Chess Review:

‘Tinsley has said: “Knight on the rim equals trim.”’

‘The mortal remains of Mr Tinsley were interred on 4 March at Lewisham Cemetery, after a service at Lewisham Road Baptist Church, into which the body, enclosed in an English oak panelled coffin with brass fittings, was borne on the shoulders of deceased’s sons, Messrs. Edward, Samuel, Henry and Frank Tinsley.’

Page 172 of Chess: Man vs Machine by Bradley Ewart (London, 1980) has a detail of Samuel Tinsley from a painting by Anthony Rosenbaum owned by the National Portrait Gallery, London. Tinsley’s game against Mephisto, given by Ewart on pages 171-173, was annotated by Steinitz in The Field, 20 April 1878.

In The Times of 21 September 1937, page 16, Capablanca wrote from Baden about the late E.S. Tinsley’s contribution to chess:

‘He did, perhaps, more than anybody else to develop the interest for good chess in England, and he devoted a great deal of time and energy to give the readers of The Times as good and accurate a chess column as could be found anywhere.’

‘The Cuban is quite polite and conventional ... He says nothing as to the strength of Tinsley as a player or as an analyst. Have other grandmasters or masters expressed any views as to Tinsley’s strength?’

From page xvi of Lessons from My Games by Reuben Fine (New York, 1958):

In 1937 Edward Samuel Tinsley had not ‘just been retired’. He died.

Our archives contain, courtesy of the Manhattan Chess Club, a copy of a letter dated 10 August 1930 to Capablanca from E.S. Tinsley, the chess correspondent of The Times (London). After discussing the world championship rematch negotiations and whether Alekhine might participate at the next Hastings tournament, Tinsley wrote:

‘... Did I tell you that Wahltuch started talking to me about A[lekhine] saying he had asked him whether he would like to play the return match with you in England. A.’s reply was that he would not, as he did not think the English press was sympathetic towards himself! Then W. said to me, “You have something against him?” I said, “Yes, I have, and so have The Times, as he committed the unforgivable sin, so far as they are concerned. He will get justice from us, as Champion of the World, but nothing more.” And Wahltuch had not the face to ask me exactly what it was, perhaps he knew! If he did, he knew what a fool Alekhine had been, as he would be under no illusions as to what a bribe meant to our people. The roguery was in throwing over his own friend, so soon as he realized our attitude in the matter.’

To what is Tinsley referring? Some mordant comments by Purdy from page 89 of the July-August-September 1966 Chess World:

‘The worst annotator of all time was Tinsley, who used to edit the chess column of the London Times Weekly [sic] in my boyhood and quite a long time after that. His father was S. Tinsley (an expert who played at Hastings, 1895), and when the father died, the son came along with copy as usual. The management (not chessplayers) took him on, and paid him good money for gibberish over several decades till at long last he died, regretted by none of the many chess-playing readers of The Times in the far-flung outposts of the Empire.

He earned the curses of the chess world, and many players would have reserved him a special corner of Hell where he could receive his weekly cheques as usual but never cash them through all eternity.’

‘Reading the new Najdorf: Life and Games I noticed this improbable anecdote on page 251: “It was during the same Margate congress [i.e. 1939] that Najdorf received a compliment from Samuel Tinsley: ‘Mr Najdorf, your play is most insouciant.’ Taking this unfamiliar word to mean something like careless instead of carefree, Najdorf retorted angrily: ‘Are you insulting me?’”

Samuel Tinsley, chess columnist for The Times, died in 1903. Gaige’s Chess Personalia lists also an Edward Samuel Tinsley (a son, perhaps?), but he died in 1937. Thus attendance by either at Margate, 1939 seems unlikely.

Was there yet another Samuel Tinsley, or is this just another “good story”?’

‘After the death of his father in 1903 he and his two brothers took over the chess work for The Times, and their collaboration continued until 1912, when Edward took full charge.’

As noted on page 147 of A Chess Omnibus, in January 1926 a radio presentation about chess on the British Broadcasting Company was made by ‘Mr S. Tinsley’, a brother of Edward. His forename was Samuel (BCM, April 1903, page 159), but we do not know whether he was still alive in 1939, whether he was the person who spoke to Najdorf or, indeed, whether the alleged 1939 exchanges occurred at all.

Justin Horton (Huesca, Spain) wonders who was being referred to by Gerald Abrahams in the following paragraph from page 115 of his book Not Only Chess (London, 1974):

‘The computer, however, has no judgement, except the arithmetical. They say of the computer that if it has to choose between two clocks, it prefers the one that has stopped to the one that loses a second a day, because the former is accurate twice a day and the other is only accurate after many days. In this the computer resembles an unlamented Times correspondent who reviewed the position at the adjournment in a Hastings Congress. On each of five boards he predicted victory for the player with the pawn to the good. In every case that player lost.’

The name of E.S. Tinsley naturally comes to mind (see pages 245 and 272 of Chess Explorations), but we know nothing about the specific accusation made by Abrahams.

C.N. 8725 referred to William Winter’s criticisms of E.S. Tinsley, which were first quoted in C.N. 1197. The relevant pages of CHESS are given below: Page 503 of the October 1937 BCM published an obituary of Edward Tinsley: An extract from the article by G.H. Diggle referred to in C.N. 8725 (first published in the June 1979 issue of Newsflash), concerning Edward Samuel Tinsley:

‘He was a well-known character at chess congresses between the Wars – a dignified, florid, slightly ponderous man, with notebook in hand and pencil poised at the ready, wandering from board to board like “the friendly cow, all red and white” and compiling such mildly censorious thunder as “X went sadly astray on the tenth move” or “Y appeared completely unfamiliar with this line of play”. He had his detractors, as his own chess achievements were something of a mystery; and congress cynics whose play he had criticized reacted sometimes with jocular slanders about “old Tinsley”, comparing him with the celebrated public school games master who stood on the brink of the swimming bath upbraiding his struggling pupils until one day he fell in himself, couldn’t swim a yard, and had to be fished out. But the truth was, as the BCM obituary put it, that “although in no way approaching his father’s strength at the game, he had a good knowledge of chess, and occasionally played for Kent County”. One master who greatly respected him was Capablanca, who always called at the Times office whenever he was in London. Tinsley always demanded of himself nothing less than 100% accuracy when reporting a congress; the BM once heard him “trumpet loud and long” when a colleague had furnished him with an incorrect result, though the game in question was in a third-class section. His death was tragically sudden – he was actually reporting the Centenary Congress of the Worcester C.C. when he collapsed when the last round was in progress; the players were kept in ignorance until the games were over, and the presentation of the prizes cancelled as a mark of respect.’

‘According to the probate records, available on ancestry.co.uk, Edward Samuel Tinsley of 194 Algernon Eoad, Lewisham, Kent died on 11 September 1937 at the Public Hall, Worcester. Administration of his estate (i.e. he left no will) was granted to his widow, Emelie Kate Tinsley, and was valued at £205.’

‘His flowing white moustache and stately bearing will be remembered with affection by thousands of chess enthusiasts not only in Great Britain but also on the Continent and in America, for he travelled widely to the various chess events.’

Chess and Radio quotes, from two January 1926 issues of the Chess Budget, brief references to a British Broadcasting Company talk on chess by one of Edward Samuel Tinsley’s brothers, Samuel. We have now found a transcript, in an improbable place: the chapter entitled ‘The Indian Ocean’ in his travel book Across the World (London, 1937). Some gleanings from the above pages (which were unnumbered):

‘Politics is just a game in England today. Our leading men play it just as we play chess. There is very little consideration of Statesmanship or what is best for the Country and the Empire at large. The main question is the game – which move will best suit the scramble for place and power.’

Source: unnumbered page in the chapter ‘The Pacific Ocean’ in Across the World by Samuel Tinsley (London, 1937), the book discussed in C.N. 8725.

The photographs below of Tinsley and his wife are in the chapter on ‘The Dominion of New Zealand’: Below is the billing for Samuel Tinsley’s talk on chess (British Broadcasting Company, Saturday evening, 23 January 1926) in the programme schedule on page 157 of the Radio Times, 15 January 1926: As shown in C.N. 8725, Tinsley mentioned in his talk that the Anderssen v Kieseritzky ‘Immortal Game’ was published in the same issue of the Radio Times. From page 148: Permission to show the above material has been received from Immediate Media Company London Limited, the publishers of the Radio Times.

A photograph of Samuel Tinsley from his book Across the World (London, 1937): Can it be discovered when he died?

From Across the World by Samuel Tinsley (London, 1937):

C.N. 8798 asked whether it could be discovered when Samuel Tinsley died, and we have now received the following from John Townsend (Wokingham, England):

“Tinsley – Dobson. On 6 May, at the City Temple, London, by the Rev. G.S. Walker, of Stalybridge, Samuel Tinsley, second son of the late Mr Samuel Tinsley of Lewisham, to Marion, only daughter of Mr and Mrs Edward Dobson, of Sidcup.”

Most picturesque figure aboard when the Orcades sailed from Station Pier this week was Mr Samuel Tinsley, of Hook Heath, Woking, Surrey, former London journalist and retired publisher and printer.

Smiling blue eyes twinkled above a Bernard Shaw beard, and a tie and kilt of the McLaren tartan, while a leather sporran matched his Scotch brogues. Add to this a fistful of multi-coloured streamers and you have a picture of a grand old man who thinks that Australia is a wonderful country.

After spending three months in New Zealand and Australia principally fishing, he is going home convinced more than ever that the ‘colonies are solidly behind the mother country’, though he did not specify if that meant England or Scotland.”

Below is an entry for his will in the National Probate Calendar in 1945:

“Tinsley – On 18 May 1945, at Fieldway, Woking, after a short illness, Samuel Tinsley passed peacefully away.”’