‘I don’t mind smoking interfering with my play. Some folks say it takes the sharp edge from one’s intellect, and spoils one’s memory. I haven’t found it so. I’ve smoked since I was 14, and I can play better when I have a cigar in my mouth – only a cigar, never anything else. When I play a lot of games at the same time, I must be keyed up to it, as it were. I practise what you call self-hypnotism. It is largely will-power. You see, it’s just this way. When it becomes my turn to make a move at one of the chess boards, my mental powers are concentrated severely on the one move. All the other chess boards, the checkers and whist are obliterated from my mind. It is as though I had never started playing those games at all. I seem to remember nothing of them. I come to a decision, the move is made, and I turn again to the cards in my hand. Quick as lightning the game of chess vanishes from my mind. Now it is nothing but whist with me. I seem never to have had a thought of anything but the game of cards. I play one. Then I move one of the checkers. These transitions of mind take place so quickly that I seem to be playing chess, checkers and whist all at once, and to be thinking of all the games at once. But it is as I explained. The only thing I really need for the ordeal is my cigar.’

Innumerable books affirm that Alekhine gave up smoking in preparation for his 1937 match with Euwe, as if that were an unprecedented decision. From page 62 of the April 1929 American Chess Bulletin:

‘He [Alekhine] no longer smokes. We understand that he bid farewell to Lady Nicotine soon after the New York tournament of 1927 …’

‘That the hopes placed in him in this tourney may not be realized is due – paradoxical as it sounds – according to the observation of the author of this article, to an excessive use of nicotine. Certainly a cigarette has a soothing effect for a moment. However, a player deep in thought and excited is easily apt to smoke too much, thus, in the first line, spoiling his memory and ruining his nerves and his power of resistance. Only when I rid myself of the passion for cigarettes did I attain enough confidence to win the world championship.’

‘Although Alekhine gave up smoking for the world championship, he took up the habit again as soon as the match was completed. One night he went to bed with a lighted cigarette and woke up amid flames. Luckily, he was not injured.’

The following appeared on page 27 of the February 1931 American Chess Bulletin: The report in the Wiener Schachzeitung (on page 374 of the December 1930 issue) was nearly 40 lines long.

The above-mentioned report on page 374 of the December 1930 Wiener Schachzeitung: 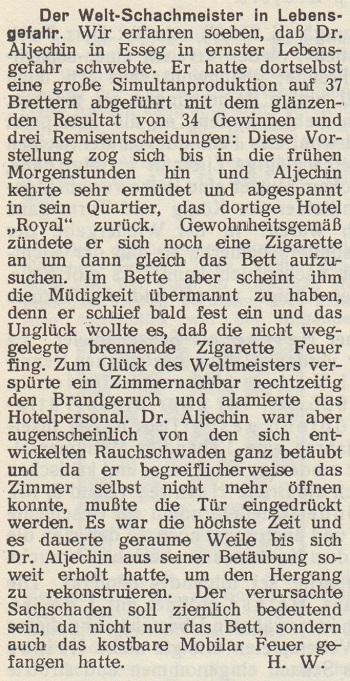 The report, headed ‘Monday’ (i.e. 29 December 1930), states, improbably, that the hotel fire occurred ‘this morning’. On that day, as shown by page 389 of the Skinner/Verhoeven book on Alekhine, the world champion was in Novi Sad, having previously been in Subotica. On 23 December 1930 he gave a simultaneous exhibition in Osijek, the city referred to in the Wiener Schachzeitung report (Esseg in German).


Many tales have been told of Lasker’s liking for noisome cigars, but he was not alone. The following quote about Winawer comes from an article by Robert J. Buckley on page 43 of the February 1923 American Chess Bulletin:

‘We met him last at the great London tournament of 1883. He was smoking poisonous cigars. We submitted something better. He smoked one of ours and refused another.

“I can’t stand good cigars”, he explained. “I’ve been accustomed to bad ones for so many years that I prefer them. Besides”, and here he poked poor Zukertort in the ribs, “I rely on the stench of my cigars to knock my opponents over; if I could get them bad enough I think I would win first prize”.’

Staunton was a smoker, as is shown by the following reminiscence by G.A. MacDonnell on pages 3-4 of Chess Life-Pictures (London, 1883):

‘He generally stood near the door (as a rule he seemed to prefer standing to sitting), talking vivaciously to some friend, and smoking his favourite canaster in a large and grotesquely-shaped pipe.’

On page 366 of the December 1885 issue of the International Chess Magazine Steinitz reported on a match in Manchester which aimed to prove whether chessplayers were stronger in consultation, with or without tobacco. ‘Fifteen smokers were pitted against a like number of opponents who abhor the weed, and the result was a tie.’ Steinitz then commented:

‘There are, however, few chess masters who do not smoke, and among the minority of total abstainers from the weed are Messrs Gunsberg, Martinez, Paulsen and Chigorin. But the non-smokers are also supported by the example of one whose name, no doubt, outweighs many others, for Morphy, as is well known, never indulged in the practice. I am afraid, however, it is no use preaching to those who have already contracted the habit, for I have myself several times tried to get rid of it without success.’

Pages 275-276 of the July 1924 BCM related that Maróczy, who had gone to England after the New York tournament, had pointed out that seven of the eleven masters in that event were non-smokers. Among them, the BCM remarked, was Marshall, ‘a different state of affairs from the halcyon days of his last visit here, when he was hardly ever without his big cigar’.

An article by Hans Kmoch and Fred Reinfeld on pages 136-137 of the May 1952 Chess Review blamed, or perhaps praised, tobacco shortages during the Second World War for accelerating the decrease in chessplaying smokers. It stated that at the world championship challengers’ tournament in Budapest in 1950 no smoker was among the participants (Boleslavsky, Bronstein, Flohr, Keres, Kotov, Lilienthal, Najdorf, Smyslov, Ståhlberg and Szabó).

The following was added on pages 234-235 of A Chess Omnibus:

Smoking is peculiarly liable to cause anecdotitis among chess writers, and a few stale stubs are to be found on page 455 of issue 31 of Les Cahiers de l’Echiquier Français. A more reflective approach was adopted by Norman Alliston in an article entitled ‘Minor Reflections on Chess’ on pages 2-4 of the January 1901 BCM:

‘I do not hold much of those chess brothers who refrain from the smoking of tobacco. These non-smoking gentlemen are usually hard-thinking, uncomfortable antagonists. They are apt to play woodenly, and become somewhat impatient between the moves. Cigars, I somehow fancy, will give a deep and rather technical game. Cigarettes will tend to make the encounter sprightly or boisterously reckless. For my opponent, I would hove one versed in the cult of the crusted briar; then shall our game be level-headed yet lively, sprightly yet discreet, novel yet dignified, exciting yet untroublesome – pre-eminently sociable.’

‘Sonja Graf is the gay, the volatile; Miss Menchik the quiet and homely. Sonja Graf smokes endlessly; in the rare intervals between cigarettes she violently chews sweets. Between moves she rushes round the room, exchanging a few quick words with all and sundry; at the board her hair is dishevelled, her face drawn and anxious, her whole bearing tense to the point of painfulness. She blunders – and achieves brilliancies.

Miss Menchik on the other hand sits, plump and placid, her arms folded before her, not a muscle twitching through hours of play. We cannot remember having seen her smoking a cigarette. Her play rarely departs from a steady standard of calm solidity.’

Footnotes accompanying the material in A Chess Omnibus gave additional information. Regarding Lasker, one yarn from ‘Exchanges’ was in Lasker’s Chess Magazine, December 1908-January 1909, page 91. An eye-witness report of Steinitz’s smoking at London, 1899 was given in C.N. 2637 from pages 210-213 of La Stratégie, 15 July 1899: ‘On his table Steinitz always had a carafe of pure water, from which he drank large glassfuls while smoking his cigar, which, absent-mindedly, he generally set down, still alight, on the green baize covering the table.’  A reference to Rubinstein as a smoker appeared on page 366 of the September 1924 BCM. The obituary of Colle on pages 238-239 of the June 1932 BCM stated: ‘Ill-health, however, was his constant handicap, as he was always on diet and had to be most abstemious – in everything except cigarettes! – wherever he stayed.’


Concerning the famous ‘smoking threat’ matter discussed in A Nimzowitsch Story, we note the following on page 369 of Aron Nimzowitsch On the Road to Chess Mastery, 1886-1924 by Per Skjoldager and Jørn Erik Nielsen (Jefferson, 2012):

‘The anecdotes have, of course, left the impression that Nimzowitsch disliked smoking very much. But the drawing of Nimzowitsch from the tournament in Copenhagen 1923, however, discloses Nimzowitsch to be – a smoker. A letter from his younger brother Benno to Professor Becker, written in 1935, confirms, though with a chronological vagueness, that Aron was a diligent smoker “when he was young”. The letter also said that he had to give it up because of health problems. Like many other ex-smokers, Nimzowitsch then developed a strong dislike for tobacco smoke.’

The sketch in question is shown below, courtesy of Mr Skjoldager: This is, we believe, a 1950s promotional photograph for women’s pipe-smoking, but are any more details available? It was published on, for instance, page 182 of The Ultimate Pipe Book by Richard Carleton Hacker (Beverly Hills, 1984). 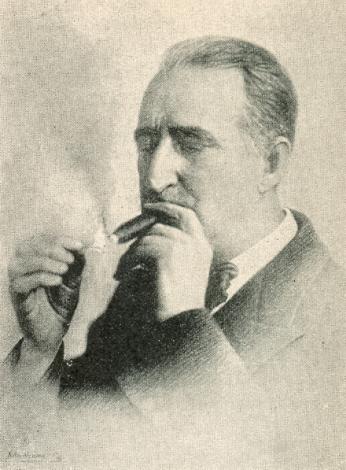 
An item not readily found nowadays was being sold by CHESS in the mid-1950s. From the front cover of the 2 April 1955 issue: 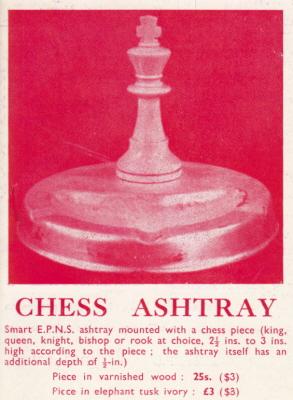 
From an unsigned article ‘The Impressions of a Spectator at Nottingham’ on pages 481-482 of the October 1936 BCM:

‘The only complaint I heard was that the spectators in the room in the upper hall, where the masters played, were not allowed to smoke, and this caused several people who had intended to remain four or five days to leave after one or two.’ On the left is the former (and future) Australian chess champion John Purdy. The page was provided courtesy of his widow, Felicity.

‘It’s no use fuming at your opponent’s smoking. As your Parisian library notices put it: “It is defence absolute to fume.” Over the chessboard, so much depends on the mellowness of the cheroot, meerschaum or hookah, the direction of the prevailing wind, and so on. Due regard to such factors, and one should be able to “fumer” without fumigating. We could suggest a tournament for the un-nicotined: perhaps the de-nicotined could also be admitted.’