Underpromotion in Chess by Edward Winter

A position on page 61 of volume one of Schachtaktik by Erwin Voellmy (Basle, 1927):

Antonio Gude (Madrid) sends this position from a game between Michael Adams and Tony Miles at Tilburg on 17 November 1993:

White played 90 b8(N), and according to the tournament bulletin the game was drawn at move 122. However, Tony Miles (Birmingham, England) informs us:

‘It was actually drawn around move 135, but neither the players nor the computer monitor could keep track during the final time scramble.’

Alain Pallier (Avignon, France) offers a further example. The position below occurred at the end of the game between Najdorf and Schweber at Buenos Aires, 1968:

We can offer only the remaining moves, as published by Tim Krabbé in the source indicated in the earlier C.N. item (New in Chess, November 1985, page 57): ‘and Black resigned; the next move would be mate’.

A large number of specimens of knight promotion without check were given by René Olthof in an article entitled ‘Silicon Curiosities’ on pages 80-83 of the 4/1994 New in Chess.

Julián Alonso Martín (Seville, Spain) forwards us the following position from a 1985 correspondence game between Palevich and Lebelt:

The above was published on page 29 of issue 1 of the ‘Especial’ edition of Ocho x Ocho. We should like further details.

He also reports that the Palevich v Lebelt position inspired him to compose the following ending, which was published in the 12/1986 issue of Schach-Echo, as well as on page 260 of Schachspiegel 2/1992:

White to move and win


How does White mate in four moves from the position below?

Source: CHESS, January 1953, page 65, which merely intimated that the problem had been published in Munich circa 1908 and did not identify the composer.

The problem was by Oswald von Krobshofer (1883-1960) and, according to secondary sources, was published in the Münchener Neueste Nachrichten in 1908. Our thanks to Ivo Fasiori (Prato, Italy), Michael McDowell (Westcliff-on-sea, England) and Graeme Oswald (Chester-le-Street, England) for this information.

The above comes from page 186 of Chess Curiosities by Tim Krabbé, and Claus van de Vlierd (Oldenburg, Germany) asks whether the full game-score is available.

We note that various databases break off the Kholmov v Ehlvest game in this position, after 40...b5: Is anything more known about the game’s conclusion?

Michael McDowell points out that a miniature study by S.G. Belokon quoted on page 310 of Test Tube Chess by A.J. Roycroft (London, 1972) shows promotion to both knight and bishop and the same finish as in the Szabó position. 
In a letter on page 7 of the January 1937 Chess Review Herbert Harvey proposed a rule change whereby a pawn would ‘become by promotion automatically the piece appropriate to the file on which it is promoted’. A choice of pieces would exist only in case of promotion on the king’s file. 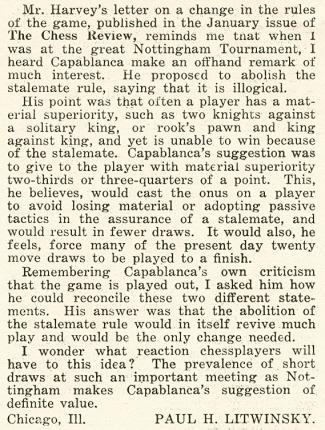 
A five-star book just published is The Art of the Endgame by Jan Timman (Alkmaar, 2011). Chapter five is entitled ‘Knight Promotions’, and we became particularly interested in the pair of compositions on pages 82-83: Regarding the latter composition, Timman commented:

‘It is unclear when this study was made. In the database it has been adorned with the label “source unknown”.

Who was F. Fritz? He should certainly not be mixed up with Jindřich Fritz ...’

The main historical issue raised by Timman is whether Sigmund Herland was the first to compose such a study, in 1913, or whether the Fritz position antedated it. We offer some jottings.

We note furthermore that the endgame database of Harold van der Heijden has the following study by Hugo Geiger of Munich from page 38 of the February 1920 Deutsche Schachzeitung: When the solution was given on page 139 of the June 1920 issue it was remarked that the third promotion to a knight was not necessary, because 11 d8(Q) would win too:

The Geiger position was also discussed, without identification of him, in T.R. Dawson’s ‘Endings’ column on page 218 of the May 1938 BCM: As regards the ‘fatal flaw’, the key point is whether the white king is on b1 or c1. The van der Heijden database has both versions, but who first proposed the improvement of placing the king on b1? 
Steven B. Dowd (Birmingham, AL, USA) notes that the knight promotion motif was used in a composition by Donald H. Hersom in the 10/1936 Fairy Chess Review. It can be found on-line by copying PROBID='P0553007' into the search-box of the Schwalbe website.

Harold van der Heijden (Deventer, the Netherlands) answers the question in C.N. 7418 about who proposed the improvement (white king on b1, and not c1) in this study from page 38 of the February 1920 Deutsche Schachzeitung: Mikhail Zinar (Ukraine), on page 137 of a book co-written with Vladimir Archakov: Гармония Пешечного Этюда (Kiev, 1990).

‘What is the simplest or most sparse legal position, in terms of number of units and strength of material, in which the only winning move is promotion to a bishop? In 1969 I composed this pair of positions: Again, promoting to a bishop is the only winning move, although the defenses are different (beginning with 1...Ne7+ 2 Kf6 Kh7).

A related question concerns the simplest or most sparse legal position in which promotion to a bishop is the only way to draw (by self-stalemate.)’ The latter line depends on a perceived flaw in the chess laws of the time (Article 8). The problem, by Jose Benardete [sic] and Edgar Holladay, was published on page 2 of Chess Life, 20 October 1949. It was given too on page 46 of Chess World, 1 February 1950: 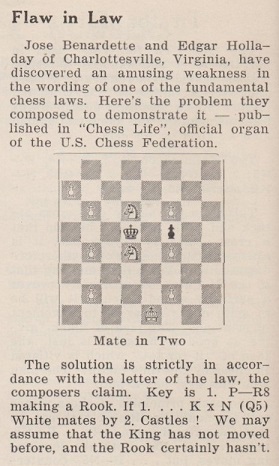 White to move and mate in two

One of our feature articles on the Laws of Chess mentioned that the ‘International Chess Code’ was published, inter alia, on pages 207-224 of Chess for Fun & Chess for Blood by Edward Lasker (Philadelphia, 1942). An extract from the provisions on castling (pages 212-213):

‘The king can be moved to a square adjoining the square he occupies except in the case of castling, which is a combined move of the K and the R, but counts as one move, in which first the K, occupying his own square, is placed on one of the two nearest squares of the same color as his own in the same rank and then the R, towards which the K has been moved, is placed on the next square on the further side of the moved K. Castling is not permitted (a) when either the K or R has been moved previously; (b) when any square between the K and the R is occupied by a man; (c) if the K be in check; or (d) if castling would cause the K to pass over, or occupy, any square on which he would be in check.’

The above position was presented by Jack Straley Battell on page 33 of the February 1955 Chess Review:

Where did the problem originate? 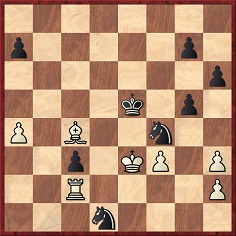 That was the conclusion of a game won by Soldatenkov against C.P. Weeks which has been found by Eduardo Bauzá Mercére (New York, NY, USA) in the Brooklyn Daily Eagle, 24 March 1921, Section 1, page 3: 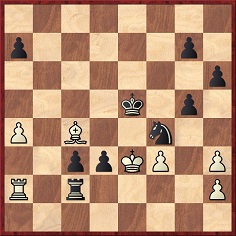 
Regarding the famous Saavedra position, see pages 34-35 of Kings, Commoners and Knaves and C.N. 5796.