The above photograph from our archives was included in the plate section of our 1989 monograph on Capablanca. The caption duly noted that the Cuban’s opponent was the publisher and promoter Bernhard Kagan.

As mentioned on page 315 of A Chess Omnibus, a few years later Dimitrije Bjelica helped himself to the picture, without permission or acknowledgement, publishing it with an obvious misidentification on page 31 of his book Alexander Alekhine (Madrid, 1993):

The above-mentioned section in A Chess Omnibus contained a further item also originally published by us in Kingpin, i.e. a contribution from Alessandro Nizzola (Mantova, Italy):

‘Page 8 of The Oxford Encyclopedia of Chess Games has an illustration with the caption “Salvio A.”. However, it is not Alessandro Salvio but Marco Aurelio Severino, as is shown by illustration 9 (between pages 96 and 97) of Chicco and Rosino’s book Storia degli Scacchi in Italia.’


From page 78 of George Koltanowski’s book TV Chess (1968) we reproduce the following, with no comment or surprise:


On page 117 of Historia general del ajedrez by Julio Ganzo (Madrid, 1973) a photograph of Blackburne was labelled ‘Chigorin’:


A handful of old portraits of Philidor are known, but one alleged picture stands out as altogether different from the rest. It was published on, for instance, page 47 of La fabuleuse histoire des champions d’échecs by N. Giffard (Paris, 1978) and on page 46 of volume 3 of Lademanns Skak Leksikon by S. Novrup (Copenhagen, 1982). What is known about its origins?

Claes Løfgren (Randers, Denmark) points out that a colour version of the alleged Philidor picture appeared on page 79 of The World of Chess by A. Saidy and N. Lessing (New York, 1974). Page 248 stated that it came from the Cleveland Public Library.

As regards the observations by our correspondent in C.N. 3448 (see above), we are grateful to the Cleveland Public Library for providing us with a scan of the original portrait:

The World of Chess and La fabuleuse histoire des champions d’échecs gave the picture in reverse form, as did page 46 of volume 3 of Lademanns Skak Leksikon by Svend Novrup (Copenhagen, 1982).

The Cleveland Public Library has also sent us documentation about the picture, including a letter dated 8 November 1988 from Jean-François Dupont-Danican and the Library’s subsequent conclusion on a catalogue card that researchers should be discouraged from attributing the portrait to Philidor.


Small photographs of chess personalities frequently appeared at the top of pages of the Chess Amateur. The September 1910 issue (page 354) had the following:

This is evidently not Capablanca, but how did the mix-up occur?


On page 262 of A Chess Omnibus the caption to a sketch of a crowned figure reads ‘King George V’. However, as has been pointed out on page 223 of the April 2005 BCM, the picture in question had appeared in the BCM in (September) 1905 and was not of George V (who did not ascend to the throne until five years later). To correct the record, we add that in the 1905 BCM the sketch had the caption ‘The (B.C.F.) King, 1905’ and that it depicted H.E. Atkins in regal attire, following his victory at the congress in Southport.


When Réti died a Vienna newspaper, Der Abend of 6 June 1929, mixed him up with Bogoljubow:

In reality, both parts of the caption (‘Dr Emanuel Lasker’ and ‘in March, 1921’ are wrong. As noted on page 315 of A Chess Omnibus, the player is Tarrasch. We add here that the photograph was the frontispiece of Schachjahrbuch für 1908 by L. Bachmann (Ansbach, 1909), whose caption correctly identified the two masters and noted that the picture had been taken in Munich during their 1908 world championship match.


C.N. 3620 gave this photograph of Jacob Bernstein (left) and Oscar Chajes, which was the frontispiece of the Carlsbad, 1923 tournament book:

In a number of places (not only on the Internet but also, for instance, on page 23 of the San Sebastián, 1911 tournament book mentioned in C.N. 4741) the left-hand part of the photograph is used as an illustration of Ossip Bernstein.

C.N. 1546 (see page 158 of Chess Explorations) mentioned that Chajes and Jaffe were sometimes confused and that on page 239 of volume II of Capablanca, Leyenda y Realidad (Havana, 1978) Miguel Sánchez even wrote ‘Chaffes’.


To the many instances of mistaken identity noted over the years, Javier Asturiano Molina (Murcia, Spain) adds a striking one, from page 222 of El Ajedrez by J. Martí (first published in Barcelona in 1969):

The longevity of that particular Leonardo and the dates concerning Labourdonnais, Philidor, Botvinnik, Smyslov and Tal are a bonus.


Jan Kalendovský (Brno, Czech Republic) has sent us page 5 of the 2 August 1931 issue of Wiener Bilder, and the chess part is reproduced below:

The caption on the right correctly names the line-up of the victorious US team in the Prague Olympiad but identifies the woman as Vera Menchik. Who was she really?

As remarked in the feature article Alexander McDonnell, no picture of him is known to exist. Even so (and although he died aged only 37, in the pre-photography era), the following appears in Worlds of Chess Champions, the booklet issued in 2003 by the Cleveland Public Library and mentioned in C.N.s 5149 and 5150: 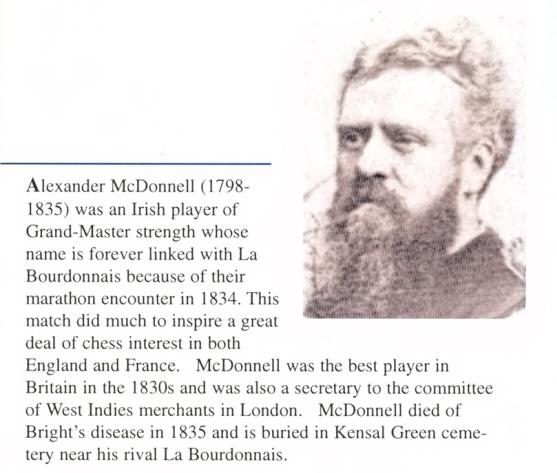 It is not uncommon for Alexander McDonnell to be confused with George Alcock MacDonnell. This is another (gross) case of mistaken identity. As noted in our feature article on Alexander McDonnell, no picture of him is known. The above illustration in CHESS, given in C.N. 3974 and in Excuses for Losing at Chess, was the frontispiece to Chess Life-Pictures by George Alcock MacDonnell (London, 1883): Our correction was reported on page 43 of CHESS, November 2016.


Olimpiu G. Urcan (Singapore) notes a Dutch website which purports to show a photograph of Capablanca giving a simultaneous exhibition in Havana in 1897.

As pointed out by us on page 52 of the Winter 2000 issue of Kingpin, the front page of the Cuban newspaper Juventud Rebelde dated 13 November 1988 also claimed that the picture showed Capablanca ...

... whereas in reality the prodigy was Reshevsky. He was dressed similarly in a photograph given in C.N. 4212:


Together with a version of even better quality, C.N. 7602 reproduced this photograph (New York, 1927) from page 60 of the March 1927 American Chess Bulletin: 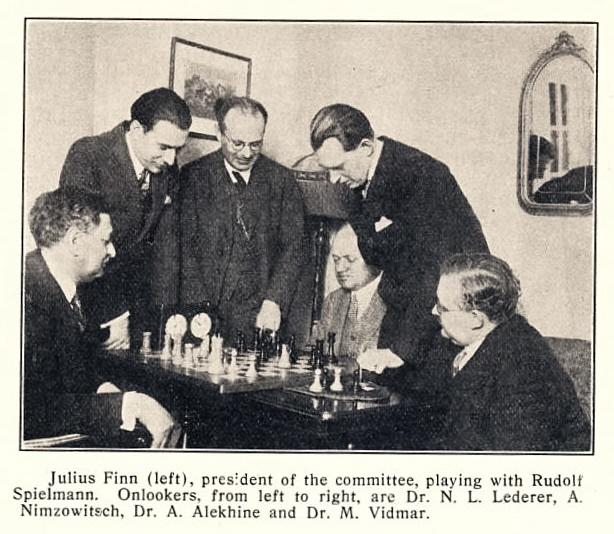 A much poorer version, with an even poorer caption, has appeared on page 45 of Alexander Aljechin Biografie des 4. Schachweltmeisters by W. Daniel (Eltmann, 2012): 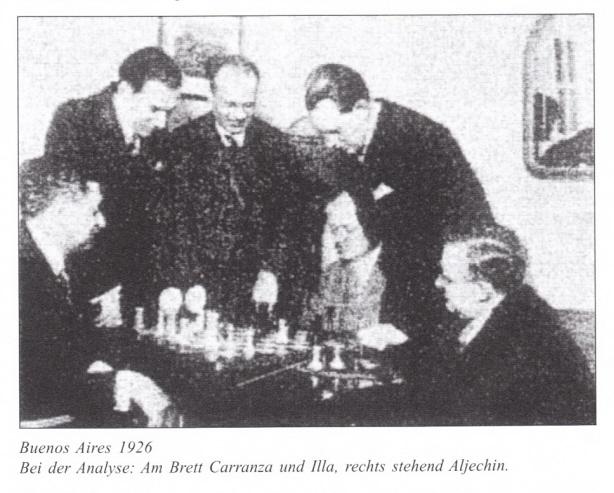 
Page 29 of the hardback edition (1977) of Harry Golombek’s Encyclopedia of Chess illustrated the Bird entry with a picture of Buckle:

C.N. 9457 observed regarding Joseph Henry Blackburne. A Chess Biography by Tim Harding (Jefferson, 2015) that ‘the work as a whole would have benefited from greater attention to certain C.N. material’. Page 111 of the book provides another example:

The picture shows not Henry Edward Bird but Henry Thomas Buckle, as was pointed out in C.N. 8346 in connection with page 29 of the hardback edition (1977) of Harry Golombek’s Encyclopedia of Chess.

The Harding book (as well as Emanuel Lasker Denker Weltenbürger Schachweltmeister – see page 691) took the illustration from opposite page 194 of A Century of British Chess by P.W. Sergeant (London, 1934):

We do not know why Sergeant/Diggle thought that the picture was of Bird.

It was included in an item about Buckle (C.N. 3464), and below are the frontispiece and title page of Essays by Henry Thomas Buckle (New York, 1863):

When the picture of H.T. Buckle was published as the frontispiece to volume two of The Life and Writings of Henry Thomas Buckle by Alfred Henry Huth (London, 1880), the caption stated that he was aged 35:

A similar picture appeared, with a chess theme, as the frontispiece to A Victorian Eminence by Giles St Aubyn (London, 1958):

One of the portraits shown in C.N. 9556 is on page 23 of H.E. Bird by Hans Renette (Jefferson, 2016), with the caption ‘Henry Thomas Buckle (Chess Player’s Magazine)’. Courtesy of the Cleveland Public Library we reproduce it below from opposite page 33 of the February 1864 issue of the Chess Player’s Magazine: Michael Clapham (Ipswich, England) refers to the mix-up over Bird and Buckle in a well-known picture and adds that the same error is on page 178 of Pour Philidor edited by Jean François Dupont-Danican (Koblenz, 1994).

We note that the Bildnachweise on page 238 stated that the source for the picture was volume one of Verdens bedste skak by Jens Enevoldsen (Copenhagen, 1966), and that that book was also wrong about Bird’s first forename. From page 89: This photograph comes from page 40 of Chessworld, January-February 1964, in an article on Morphy by David Lawson. One of two similar shots, it was also given (‘Paul Morphy and a lady’) on page 333 of Lawson’s 1976 biography of Morphy. Page 109 showed the same setting in a photograph of Morphy and Löwenthal (‘London, 1858’).

Even so, page 94 of Arte y Ajedrez by Gabriel Mario Gómez (Buenos Aires, 2014) bizarrely asserts that the photograph was taken in the gardens of Buckingham Palace and that Morphy’s opponent was Queen Victoria:

In July 2015 our scan (which has ‘Pennell’ in the file name) was lifted for use on the website Chess & Strategy (Philippe Dornbusch) as a quiz question. The CHESS caption was not only deleted but also misunderstood, since the French site imagined that the man at the demonstration board was Koltanowski. It reported that over 700 readers had identified him.


Dan Scoones (Coquitlam, BC, Canada) draws attention to a set of postage stamps: Our correspondent notes that ‘Boris Spassky’ is Vladek Sheybal, who played the role of Kronsteen in the 1963 film From Russia with Love. 
Page 42 of the Times, 30 November 2016 consisted of an obituary of Mark Taimanov which was illustrated with a large photograph of Leonid Stein:

‘Having bought a digital edition of the August 2017 BCM (“Editors: Milan Dinic and Shaun Taulbut”), I saw on pages 498-499 an unsigned article “Did F.D. Yates Kill Himself?”: You are mentioned briefly near the beginning, but everything (all the facts, quotes, etc.) about Yates’ death in the entire article has been copied from your work, and without mention of your (active) feature article.

That leaves just the BCM’s general introductory paragraph on Yates’ career. It has been lifted from Wikipedia.

So more or less the only “contribution” by the BCM itself is a Wikipedia-sourced photograph of Emanuel Lasker. The magazine identifies him as “Edward Lasker”.’ The BCM thus offered not one word of apology for anything other than the Lasker mix-up.

Pete Tamburro (Morristown, NJ, USA) now informs us that, in any case, the correction itself is wrong. His sole contribution to the August 2017 BCM was a separate article on Yates elsewhere in the magazine (‘F.D. Yates and the 5 Bd2 Winawer’, on pages 494-497). The offending article ‘Did F.D. Yates Kill Himself?’ had nothing to do with him. C.N. 9069 drew attention to another misidentification in the book: on page 271 Kaiser was named as Chajes.

In the chapter on the 1834 Labourdonnais v McDonnell encounters, page 14 of Kings of the Chessboard by Paul van der Sterren (Landegem, 2019) mixes up the chess master with his grandfather Bertrand-François Mahé de Labourdonnais (1699-1753): Yandy Rojas Barrios (Cárdenas, Cuba) notes a case of misidentification on page 154 of Bohemia, 15 November 1953, where Capablanca was said to be with ‘Alhekine’ in 1927:

The start of the Wikipedia entry on Donald Byrne:

See also many of the other language versions of the D. Byrne entry listed on Wikipedia:

The photograph is, of course, of Donald Byrne’s brother, Robert.