The book whose dust-jacket carried the above commendation was by no means bad, but would many authors wish their work to be described immoderately? As will be shown below, there is, in fact, no shortage of them.

The dust-jacket in question was on The Golden Dozen by Irving Chernev. The book was produced by the Oxford University Press in 1976, and it is rare to find a reputable publisher resorting to such hype. An occasional co-author of Chernev’s, Fred Reinfeld, was also the occasional beneficiary (or, perhaps, victim) of verbal extravagance. As mentioned in C.N. 2377, his book Chess for Children (New York, 1958) called him a ‘Leading Chess Master’ and the ‘world-famous chess writer and champion player’. Only the second of those three claims seems beyond reproach.

The foregoing, however, are by no means the worst cases of hype in chess literature, as will be shown below. But first, a general caveat may be entered: self-praise by an author or publisher is not necessarily hype. C.N. 4218 noted that the back cover of Grandmaster Chess Move by Move by John Nunn (London, 2005) described him as ‘arguably the most highly acclaimed chess writer in the world’. That is a perfectly reasonable statement.

Downmarket it is a different story. As reported in C.N. 2345, the dust-jacket of Chess by K.M. Grover and T. Wiswell (London, 1952) stated: ‘Kenneth M. Grover, when 12 years old, was hailed as a chess child-prodigy, and today he is America’s number-one chess player.’ The original (1941) US edition called him ‘America’s Number One chess and checker exhibition player’. In their other books, Let’s Play Checkers (New York, 1940) and Twentieth Century Checkers (Philadelphia, 1946), the twosome also awarded themselves high-pitched write-ups. The back-cover of the former said of Grover: ‘He is America’s No. 1 checker and chess exhibition star and is popularly known as the “Mighty Mite”.’

Regarding titles for over-the-board play, authors and publishers often lose all sense of proportion. The following comes from the back cover of A World Champion’s Guide to Chess by Susan Polgar and Paul Truong (New York, 2005):

There is much more. The front and back covers also describe ‘Grandmaster Susan Polgar’ as ‘Four-time Women’s World Chess Champion’, ‘2004 Olympiad Gold Medalist’, ‘a living legend’ and ‘a four-time Women’s World Champion and the top-ranked woman chess player in the United States’. Once the reader’s toes have uncurled after that torrent, he may feel that it mainly springs from vain indecorum rather than an attempt to deceive, but the same can hardly be said of The Batsford Chess Encyclopedia by Nathan Divinsky (London, 1990), i.e. the book itself and the publisher’s puffery. The following appeared on its dust-jacket:

An alternative view to Batsford’s is provided in A Catastrophic Encyclopedia.

For hype, though, even B.T. Batsford Ltd. of the 1980s and early 1990s has been shown a clean pair of heels by a US publisher. C.N. 2377 referred to ‘the self-glorification in which Cardoza Publishing has recently allowed its chess writers to indulge – dregs pretending to be cream’. The company recently brought out a new edition (supposedly corrected, but not so) of a 2004 book on Fischer by Eric Schiller. The back cover asserts that he (Schiller, not Fischer) is ‘widely considered one of the world’s foremost chess analysts, writers, and teachers’. As shown in our review of World Champion Combinations, those same words were already being used by Cardoza over a decade ago. An alternative view as to what Eric Schiller may be ‘widely considered’ is provided in A Sorry Case and Copying.

His co-author for World Champion Combinations was Raymond Keene, and opposite the title page was a claim that he is ‘considered one of the strongest players in the world’. The considerers were naturally not named because, as pointed out in our above-mentioned feature article on the book, he played his last serious chess in the mid-1980s, and on the 1986 rating list he was not among the top ten players in England, let alone the world.

Many of his books contain material relevant to the present article, but just one further example will be given for the time being: the dust-jacket of Samurai Chess by Michael Gelb and Raymond Keene (London, 1997) described the latter as ‘the world’s leading authority on chess and mindsports. An International Chess Grandmaster and winner of 14 separate British championship titles ...’


From page 16 of Twentieth Century Checkers by Grover and Wiswell (Philadelphia, 1946), in a three-page sketch of Grover:

‘The fact that he is without doubt America’s outstanding Checker and Chess exhibition player only demonstrates his amazing versatility..’ 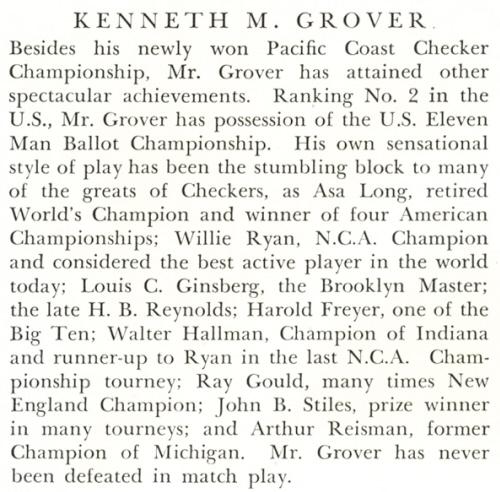 The frontispiece to Twentieth Century Checkers: 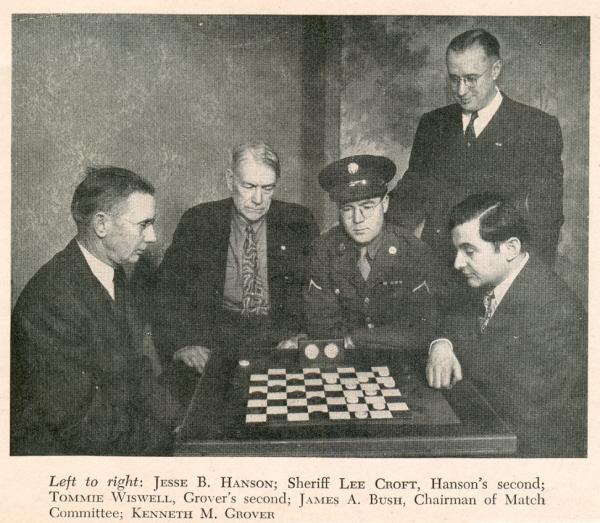 
Which chess book contains the most hype? One promising contender (at least from the pre-Cardoza era) is Fred Reinfeld’s Beginner’s Guide to Winning Chess, which was first published in 1964, the year he died. Here is the back-cover of the 1994/2006 paperback edition from Foulsham (which used the spelling Beginners’): 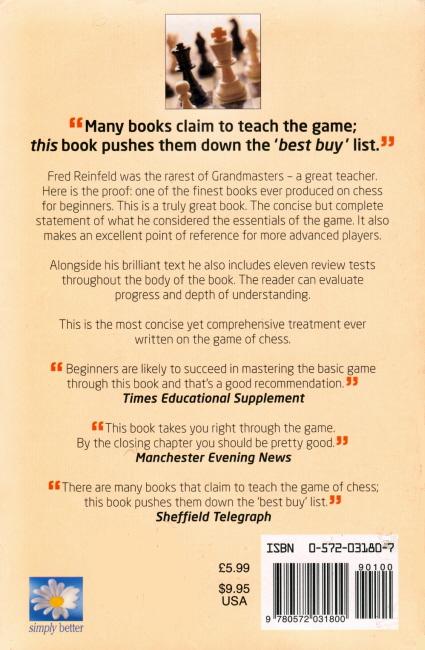 There is plenty more inside concerning ‘the rarest of Grandmasters’. Page 6 (‘About the Author’) starts:

‘Fred Reinfeld was, as Dr M.W. Sullivan states in his introduction to Beginners’ Guide to Winning Chess, a brilliant chess player and “the leading writer on chess in the entire history of the game”. This is indeed saying a great deal, since chess has been played for more than a thousand years, but the overwhelming evidence is that the Sullivan statement is actually true!’

After a page in similar vein, Dr Sullivan takes over the loud-hailer for his introduction (pages 7-8). It begins:

‘Ours is no age for a universal genius, but Fred Reinfeld offers us a close approximation of the ideal. The quality and quantity of his books made him not only the finest chess author of his day, but also the leading writer on chess in the entire history of the game.

Of course, Fred Reinfeld was a brilliant chess player ... as great a writer as he was chess player.’

Much more could be quoted, but we merely observe that it was not one-way traffic. Dr Sullivan was the author of A Programmed Introduction to the Game of Chess, and it included a full-page encomium by Reinfeld which worked itself up to the following finale:

‘... this is the most revolutionary book ever written on chess – a work that is destined to have a profound influence on all worthwhile chess books of the future.’

‘Paul Charles Morphy is the greatest chess player known to history, and it is doubtful if there will ever be a better one. ... What it does seem is that he defeated the game of chess.’

These words were quoted in C.N. 17 from the first paragraph of the article ‘Wizard of Chess’ by Robert Cantwell on pages 1079-1081 of The People’s Almanac #2 by David Wallechinsky and Irving Wallace (New York, 1978). The piece originally appeared on pages 16-18 of Yesterday in Sports edited by John Durant (New York, 1956). 
As mentioned in C.N. 1853, the dust-jacket of Warriors of the Mind by Raymond Keene and Nathan Divinsky (Brighton, 1989) described it as ‘a seminal work written by two scholars of the game’.


The title page of First Chess Openings by Eric Schiller (New York, 2005) has this description of the book:

‘The best and easiest introduction to openings ever written.’

It is true as a matter of public record that South Vietnam fell in 1975.


Regarding the Oxford Encyclopedia of Chess Games by David Levy and Kevin O’Connell (Oxford, 1981), W.H. Cozens (Ilminster, England) informed us in a letter dated 21 February 1984:

‘Cafferty recently asked me to review, for the BCM, that Oxford collection “of all the games ever played”. It is the first time he has asked me for a review but in all conscience I had to turn it down. I do like to have something good to say about a book, but in that case I fear the Oxford Chess Dept. has been the victim of some unscrupulous sales talk.’